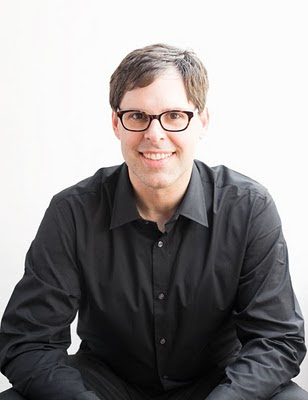 Peter Flint gave center stage to each of the instruments of Mélomanie in his piece, Ascending Tendrils, which premiered on February 19. The piece begins with a call for spring on modern flute (Kimberly Reighley) – haunting and inviting at the same time. The gamba (Donna Fournier) responds calling to mind a bullfrog and when the cello (Douglas McNames) joins in and the violin (Linda Kistler) makes a grasshopper’s entrance with the harpsichord (Tracy Richardson) buzzing like a swarm of insects – the pandemonium of spring and growth continues until…pause…unstructured measures tell the audience not to predict how growth works. The listener waits for the next cue - the flute tweets hesitantly, then more insistently-- the fledgling trying to fly. The piece builds up to a dancing, running pace and ends with a jaunty halt. Flint has inventiveness and can change style completely. The last work he premiered in Delaware (in November 2009) was Double-speaking for guitar and flute, had a gypsy, Vallanato style. And, now that he has covered birds with his Avian Orchestra, he has moved on to insects. Shall we call his new music group the Etymological Orchestra from now on?

Ascending Tendrils was preceded by Kimberly Reighley’s performance of the Bach Suite in A Minor for Solo Flute (BWV 1013). Reighley is so deft at the baroque flute (and what a treat to have that in our area) that she commands the flute through arpeggiated passages with no hesitation – running the gamut of tone color in the baroque flute – with soft but sonorous low notes and whisper-gentle higher notes in fast succession – resounding in the fairly live church acoustics.

The two Telemann quartets were played almost contemplatively – with the gentlest of tempi and extremely graceful ornamentation. The musicians have changed places, putting flute and violin on the audience’s right and cello and gamba on the left. The balance is good both ways.

Mélomanie treated us to an unusually romantic item in the Duo for violin and cello by Bohuslav Martinù. Linda Kistler and Douglas McNames pulled no punches on either tempo or expressiveness and the acoustics made the lush romantic prelude reverberate richly while the rhapsodic rondo seemed like a raucous round of dueling fiddles.