Traveling at the Theater 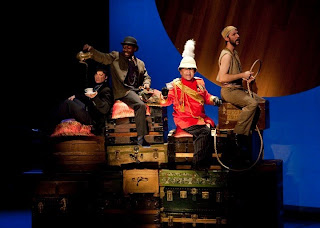 Around the World in 80 Days is the Delaware Theatre Company's newest production. Mark Brown’s clever adaptation of Jules Vernes’s novel is witty, probing and entertaining.

Director Aaron Posner’s production is terse, yet humorous. Brian Sidney Bembridge’s simple set is cleverly crafted: the circular platform unifying the swirling action on stage echoes the play’s themes of rapid world travel and self-exploration. The stacks of trunks on stage serve as elephants and trains.

There are no set changes and only five actors. Four of the actors play several parts. Dan Hodge is Detective Fix, a man who trips over his own feet, sabotaging his own investigation. Benjamin Lloyd appears as 16 different characters and many are side-splittingly funny. He runs the gamut of accents, from Chinese to Scottish and Brooklynese. As the “Newspaperman” Farah Bala gives quick updates about Fogg’s location and activities. She also plays the lovely widow Aouda, the apple of Fogg’s eye.

The play takes us on a journey of self-discovery. The friendless Fogg finds love, humanity and forgiveness during his whirlwind tour of the world.