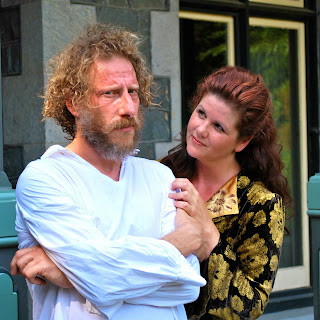 Was it the lovely evening, cooled by the threat of a storm, which never materialized, that made the evening so pleasant?

The bagpipes were resonant and the scent of spruce redolent as we walked up the hill. We spread out our pallets (we were given spots close to the stage as we had no chairs to block the vision of those in front of us) and started our picnic. We watched the couple in front of us set up their roses, anniversary card and rosé wine as they cuddled and smiled. A contagious contentment spread.

Banquo (Adam Altman) and Malcolm (Allen Radway) gave a funny theatre lecture telling us that the real Macbeth was a great and just king and that much ink had been spilled to justify Shakespeare’s portrayal of him as a murderous despot.

When Allyson Sands Good appeared as Lady Macbeth, I was immediately transported into the story. Her delivery of Shakespearean English seemed as clear as modern speech and I was as excited as she when she greeted her husband as Thane of Cawdor. Her overzealous and eager urging of Macbeth (David Blatt) was as hard to take for me as it was for him. Blatt was able to show the conflict between Macbeth’s love for his wife, for his children, and for Banquo as he yielded to a temptation, which also seemed to be his destiny.

The play seemed brief and I had just stopped mourning the senseless deaths of the children of Macduff and the lonely wanderings of Banquo’s son Fleance, they appeared in the curtain call together – the wildly red-haired Harcourt-Brooke siblings. How lovely to have their Scots features to enhance the play.

Coming down the hill in the magic of the cool evening, I felt that Birnam wood had indeed come to my perch on the high hill of Rockwood Mansion Park.

Providing an interesting pre-show lecture, Actors Altman and Radway reminded us to listen for Shakespeare’s use of meter, as well as his disregard for iambic pentameter. In fact, as they emphasized, plays during his time were “heard”, not watched. The theme of the destructive trickle-down effect of a bad king on his empire is present in many of the Bard’s plays. Poor Hamlet is tortured by the evil that runs rampant in his own family; King Lear goes mad from his own terrible decisions. Lady Macbeth is engulfed by her own bloodlust and desire for power.

Allyson Sands Good plays Lady Macbeth boldly and expertly. Her transformation from ambitious wife, courting evil into a lost soul who has descended into irreversible madness is powerful, and almost sympathetic. As Good speaks, she is so expressive and free, one forgets she is working within the confines of the written word.

Also strong is David Blatt’s performance as Macbeth. The transfer of evil from husband to wife is almost palpable. His speech “Out, out brief candle” seems a foil to Lady Macbeth’s earlier “Out, damned spot” monologue, which exposes the undoing of her sanity. As Macbeth embraces evil, he becomes seething under his veneer of cheer, whereas Lady Macbeth’s ambitions bring her to an almost unexpected demise of her sanity.

Staged by Artistic Director Molly Cahill Govern, the play runs at Rockwood Mansion Park through the end of July.

For tickets and information about the Delaware Shakespeare Festival: delshakes.org