The Pirettes of Penzance: The Women Take Over 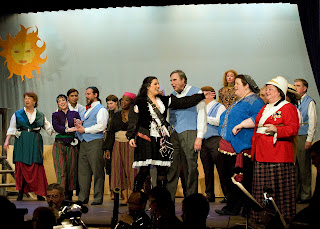 Every year since 1948, the Ardensingers have produced a Gilbert & Sullivan operetta. This year, there was something a bit different -- a reverse gender Pirates of Penzance. I asked Bob Beavins, what inspired him to created this “farce of a farce”, making the Pirate King into a Queen, and Mabel into a young stud with a penchant for high notes.

He had heard women complain for years about not having enough fun things to do in the G&S roles. So, to Beavins it seemed, the natural thing was to switch the genders around: The pirates would be played by women, the maidens would become men of leisure and all the main roles would be reversed! With stage direction by Nancy Kraus and musical direction Helene Furlong, this fun, re-worked operetta came to life at the Gild Hall.

The audience loved the “gaggle of gorgeous gentlemen” taking the stage to sing, “Climbing over rocky mountain.” These strapping men -- some of them actors probably well into their sixties -- were dressed in proper Sunday attire with blue vests, and carrying tennis rackets, croquet mallets and cricket bats.

Petra DeLuca was dangerous and risqué as the Pirette Queen, threatening to slice the throats of those who wouldn’t obey, her athletic command of the stage ideal for the role. As Mervyn (the male “soubrette”), Ryan Goulden popped out high notes with a surprised, pained expression turning Mabel’s traditionally sweet Poor wand’ring one into a ‘how-high-can-he-go’ fest, with the male chorus backing him up.

Singing well, David Silberstein played Ralph (NOT “Rafe”), a confused Piratical Man of All Work. Amy Karash was lively as the Sergeant of Police, singing with panache. Marisa Robinson made a sweet Phoebe, and Meghan Mercier was fun as lieutenant Saphir. Not only did Martha Smylie, as Major-General Stanley spit out all her words in the beloved I am the very model of a modern Major-General (I’d like to meet the G&S alto or soprano who hasn’t tried to sing that song), but she sang some glorious lush high-notes in her other solo parts.

The Ardensingers will be at the International Gilbert and Sullivan Festival in Gettysburg this June, and producing The Gondoliers in 2011.