CTC Ends Season on a High Note with Falsettos 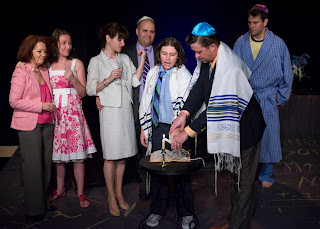 Already out and about for Art on the Town, I figured I’d add more material to the tour. I’d heard the hipsters at City Theater Company had partnered with AIDS Delaware to bring William Finn’s Falsettos to the stage. Since it hadn’t been produced in this area in more than a decade, I was eager to see what CTC – always engaging in its repertoire and staging – would bring to this Tony Award-winning play.

This season has been an amazing one for the company, starting with the blockbuster Sweeney Todd in December; CTC, as always, provided plenty to enjoy!

The Opening Night house, in The Black Box at OperaDelaware Studios, was sold to capacity, with folks even standing at the back. The Black Box space is intimate without feeling “tight”, and there truly doesn’t seem to be a bad seat in the house. You couldn’t have asked for a better opening evening – we hardly noticed the air conditioning was on the fritz, the show was so absorbing!

Falsettos is the story of the middle-aged, self-absorbed Marvin, who is struggling with his own issues and his relationships with his son, ex-wife, gay lover, psychiatrist (who marries his ex-wife) and the lesbian neighbors who live next door.

The entire cast is accomplished and well built by Producing Artistic Director Michael Gray. Gray has collected and directed an amazingly talented cast, creating a touching performance that focuses on the beauty and tragedy of all types of love and family, and he does so without sending an overly political or moral message. His interpretation of the characters is humorous, heartrending and real.

Marvin, passionately played by longtime CTC veteran Patrick O’Hara, is all-consuming in his needs. O’Hara’s voice booms and you feel his zeal and frustration as he sings “The Thrill of First Love”; then his tone lightens, coming through soothing and gentle in the touching “Father to Son”.

Jason is played expertly by Jameson May, a 12-year-old actor from Cab Calloway. May holds his own in this skillful cast and is especially enjoyable in “Jason’s Therapy” and “Miracle of Judaism”.

Jim Burns plays Whizzer, Marvin’s lover, with great strength in voice and manner. His performance of “The Games I Play” is compelling. His character is able to both captivate and infuriate. Jason loves him; Trina loathes him; Marvin seems torn between both.

Maggie Cogswell and Karen Murdock are solid and enjoyable as Cordelia and Charlotte, Marvin and Whizzer’s neighbors. They are funny and poignant, providing a wholeness to the story and further pushing home the notion that family bonds aren’t just born of blood relation.

The standout for me, though, was Trina, played riotously by Dana Michael. Michael’s neurotic, hilarious, needy, powerful performance brought the house down more than once, but her “I’m Breaking Down” was truly the pinnacle. I couldn’t imagine anyone playing this part better.

The performance enjoyed booming applause throughout, and ended with a standing ovation from the crowd. I heard one patron mention that he had seen the performance on Broadway and couldn’t wait to compare the two. CTC is up to that challenge.

Bottom line? You must see this show! We are so lucky that this musical has returned to the Delaware Arts scene. We’re even luckier that CTC is the group that has chosen to bring it. They offer one 2pm Sunday matinee on 5/16; all other shows are at 8:00pm.