A Lively Talk at The Mohawk 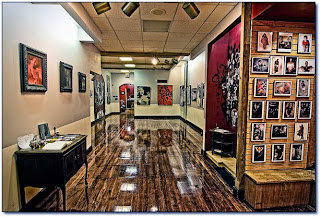 On a recent sunny afternoon, I headed down 9th Street to pay a long-overdue visit to the infamous Geoff Blake, otherwise known around town as the statement-making "Red Mohawk". True, he is that, but so much more. My hour-plus visit to his corner gallery, with sounds of early 90s Depeche Mode setting the mood, found us settling into an informal rap session with several of Wilmo's "Who's Whos" and characters alike. It was a blast. Example: As I arrived, an attractive young woman exited, having just finished a photo shoot of sensuous "pinup" shots. ("Does this happen everyday?" I asked.)

Mohawk's a 2005 UD grad in Photography with strong local ties. With Red Mohawk Gallery, he has created an amazing buzz around town, hosting monthly exhibits and events, providing opportunities for artist hangouts and generally serving as one very cool -- and identifiable -- champion of downtown's revitalization efforts. He worked nearly two years as the right-hand man for rock photographer/personality extraordinaire, Mark Weiss, a position which stemmed from a serendipitous visit to Weiss' studio with his musician friends.

In addition to his own work, his gallery currently features pieces by six Delaware College of Art & Design students. He describes his own work as "low-brow pop surrealism with a gritty tone". I describe it as art that will make you do a double-take; you may laugh wildly, you may cringe, you may be puzzled, but you'll take notice.

Blake welcomes emerging and established artists to drop in and show him what they've got. He wants to cultivate partnerships with local photographers to shoot and print at Red Mohawk, and he has a space below the gallery that he'd like to make available as a workspace for other artists. He wants his gallery to be a "...place where good stuff comes out of." Blake notes, "That is kind of the feel for the entire street...we want to create a 'diagonal of cool' here."

As we talked, we were joined by Wes Garnett, Jr. and Steve Roettger -- the guys behind the CoIN Loft -- who agreed with Blake's sentiments. "Your city is defined by your culutre," noted Garnett. "We're trying to create a '3rd Place' here, a neutral spot that is home to the entire community." In my opinion, they're all well on their way. Copper, a restaurant and catering business tied to the already launched CoIN Loft, will open in mid-July. To their description, the focus will be "the people, the libations and the menu". They're all about the partnerships and expanding the buzz, too. "Red Mohawk is all about showing the stuff that young people are into and pricing it so that all people can buy," Garnett said.

Joining us shortly into the conversation was, as Blake referred to him, "the Messiah of 9th Street" Chris Winburn of Preservation Initiatives. Winburn envisions 9th Street as the center for designers, fashion and the like. He heralds the foresight and leadership of Red Mohawk and The CoIN Loft, and hopes their efforts will spur the energy forward.

Finally, just to keep it interesting, we were interrupted by an array of salespeople and a "questionable" female artist. Blake laughs and says that he's also visited by Wayne, a homeless sage who advises him to be wary of Socialists carrying venereal diseases.

As I left, I felt so jazzed about the potential for this end of town led by "Red Mohawk" and his counterparts. Come down to 9th and spend some time...maybe buy some art and enjoy some suds or vino while you're there.