Museum Day at the DCCA

The DCCA was up, running and full of small children and their families on the second annual 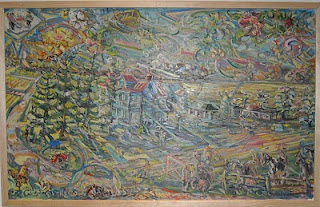 open house day for the Brandywine Museums and Gardens Alliance. The children’s comments inspired me as I stood in the Hatch Gallery looking at a joint exhibit by two DCCA studio artists called Fields of Glory/Arenas of Conflict.

Ken Mabrey is a modern impressionist. His oil on linen Till the cows come home captures the light of strong sun – the brightest light that flows through the large farmhouse and makes the dust motes dance. That same sun hits the red roof – glinting just like the real thing. In the corner is the Delaware flag. He includes the state butterfly, the state bird, the state flower and even the state bug. A biplane flies overhead, showing that Delaware once had a big airfield. Mabrey tries to fit the world into his paintings, just as he feels the world invading Delaware.

But there was so much more to see! Andrew Wapinski, another DCCA studio artist, was given a solo show of his Wasteland - gold works covered with shiny epoxy – a big stylistic change from the weather-driven pastels in his last show there.

There are five more exhibits in the downstairs galleries. Particularly interesting is an exhibit of sculptured steel and stone: Journey through Time by Hong-Wen Lin. The exhibit’s presence is due to a coordinated effort with the Council for Cultural Affairs of Taiwan and the Taipei Cultural Center of New York.