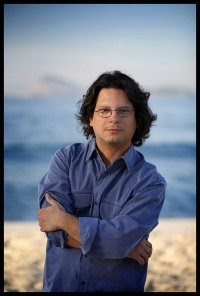 Brazilian composer Sergio Roberto de Oliveira travels to Delaware to join the classical/contemporary music ensemble Mélomanie this Saturday evening for the premiere of his work, Angico. Written in fall of 2009, this work is a collaborative commission with Aliénor (of Durham, North Carolina), whose ensemble will perform the piece later in the season. This piece is an intensely personal one, inspired by de Oliveira’s family vacation home in the Brazilian mountains, built as a fulfillment of his mother’s lifelong dream.

The composition pays tribute to the magical house he calls Angico, in honor of the Brazilian acacia tree, the Angico, which graces the property. Just after the house was built, the electrical company threatened to fell the tree. Ultimately, however, the tree sacrificed only one of its branches. It lives on as a witness to the family retreat, Angico, which the composer calls “a place full of peace and joy.”
In four movements, the music engages the audience in a fascinating story: the creation of the universe, the building of his family home, the triumph of the Angico tree over man’s threat, and, finally a celebration of the magical place called Angico.
de Oliveira and second guest composer Mark Hagerty (who will also premiere a piece entitled After Duchamp) will be on hand for Mélomanie's program this Saturday, January 30, at 8:00 pm at Grace Church in Wilmington. A post-concert meet-and-greet will be held at The Maraschino Room, on the 2nd floor of the Washington Street Ale House, just a few short blocks away. Tickets are $20; $15 for student and seniors. Youth under age 15 are free. To reserve, call 302.764.6338.
See http://www.melomanie.org/.
Posted by Arts in Media
Email ThisBlogThis!Share to TwitterShare to FacebookShare to Pinterest
Labels: Mark Hagerty, Melomanie, Sergio Roberto de Oliveira