Kiss My Art: JR Falkinburg at the Chris White Gallery 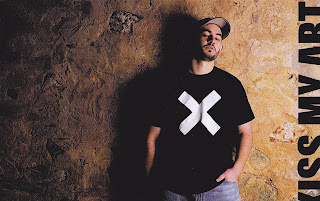 A lifelong, self-taught artist, JR Falkinburg got his start like many kids -- by drawing his favorite comic book characters. Art was a hobby that helped him relax after a day's work as an architect. Two years ago, he started painting, and opened up a whole new world of art and experimentation.

Rarely does he work with the same medium twice. His Shipley Lofts studio is filled with pieces that reflect his adventurous nature, from found object art to pieces made with wax, or plastic wrap, or paint chips. There are multi-media collaborations, photographs, and even paintings that, with the help of a smart phone, create sound. His eclectic style is meant to appeal as many senses as possible, to evoke a feeling. 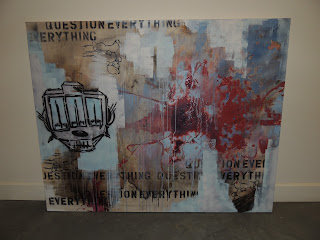 For his first solo show, "Kiss My Art," opening at the Chris White Gallery on Friday, February 1, Falkinburg will show 30 pieces, plus collaborations with other Shipley artists such as Brad Turner, John Camacho, Lorraine Foster and Kevin Bielicki.

"The idea," he says, "is to be an event instead of an art show; instead of coming in and moving from picture to picture, the whole show will be a feeling. You want to hang out."

Contributing to the event feel will be a variety of guests, including DJ Biz, tattoo artist Larry Dineen with a live tattoo session, and hip-hop dancers. 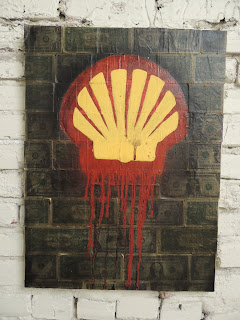 "Kiss My Art" is a collection, an experiment not hemmed in by a theme or style. Experience it on Friday from 6 to 9, or visit the gallery throughout the month a January.

The 2008 Tony Award-winning script, originally translated by Beverly Cross and Francis Evans and directed here by Steve Tague, takes us on board the comedic trip of American businessman Bernard (Jason O’Connell) as he attempts to juggle his trio of international fiancées – all flight attendants – as well as a surprise visit from his old college pal, Robert (Jeffrey C. Hawkins).

Bernard has successfully (thus far) kept all three on a tight schedule of romance, all managed through the master flight timetables he keeps on hand.  He describes his setup to Robert as “…so mathematic, it’s almost poetic.” But suddenly, reality – or more precisely, modern technology – takes control in the form of faster jet engines and colliding schedules.  Then the real fun starts: early arrivals, sneaky departures, and plenty of door slamming, pratfalls, and the ubiquitous calming cocktail.

The women in Bernard’s life – feisty Texan Gloria (Sara M. Bruner), lusty Italian Gabriella (Gisela Chipe) and uber-passionate German Gretchen (Heidi-Marie Ferren) – are at the heart of the frenzied, titillating tale.  Each was a well-played over-the-top parody, but Gretchen was downright hilarious.  However, it was the one who must keep them all straight – Bernard’s long-suffering maid, Berthe (Sarah Doherty) – who I thought delivered the most genuine laugh-out-loud moments.  Many of Doherty’s scenes were priceless even without words: her body language and subtle reactions delivered in true comedic timing.

My other favorite was Hawkins as Bernard’s nerdy, excitable pal, Robert.  While Bernard cavorts with his trio, Robert and Berthe struggle to maintain order, whatever that might be.  I loved the banter of Berthe’s and Robert’s scenes together, and at one point found myself even rooting for them to hook up and leave this dysfunctional band to themselves!  There’s plenty of clever quips, including an explanation from Gloria on what truly makes American great, which sent a roar through the audience.

I had a little problem with the actors’ blocking from my seats (at a few points, a character would completely obstruct our view of others) but I came away extremely amused and pleasantly surprised (thought there would be much more ‘dated sexism’ in the content). In the end, after the mania ensues and the smoke clears, everything is wrapped up in a classic neat little package. No spoiler alert here, though; as Hunter S. Thompson once said, “Buy the ticket; take the ride.”

The production runs through February 10. See www.delawaretheatre.org.
Posted by Arts in Media No comments:
Email ThisBlogThis!Share to TwitterShare to FacebookShare to Pinterest

The DSO is BACK!

By Guest Blogger, Christine Facciolo
Christine holds bachelor’s and master’s degrees in music and continues to apply her voice to all genres of music.  An arts lover since childhood, she currently works as a freelance writer.