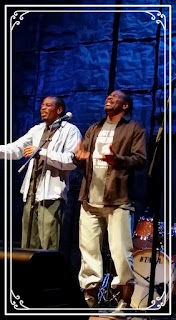 The content of this post comes from a press release from the Delaware Division of the Arts...

The Academy of American Poets announced today that the Delaware Poets Laureate, Representative Nnamdi Chukwuocha and Al Mills, also known as the Twin Poets, have received $50,000 to launch Write Now!, an art-based community building and engagement series, including workshops, readings and service projects, focused on youth in communities impacted by gun violence and fellow veterans diagnosed with PTSD. The series will culminate with the Write Now! Poetry Festival and will take place in April 2021.

The brothers and identical twins are Licensed Master Social Workers and founders of Art For Life – Delaware, a non-profit youth and community development organization rooted in the arts. The Twin Poets were the subjects of award-winning documentaries: Why I Write and Art For Life; which chronicle their artistic social change efforts. Al is an Iraq War veteran suffering from PTSD and Nnamdi is a State Representative and professor at Delaware State University.

The Delaware Poets Laureate are two of the 23 individuals that were announced as 2020 Poets Laureate Fellows. These 23 individuals serve as Poets Laureate of states, cities, counties, and the Navajo Nation and will be leading civic poetry programs in their respective communities in the year ahead. They will each receive $50,000 (the Twin Poets will receive $50,000 in total) for a combined total of $1.1 million. In addition, the Academy will also provide $66,500 to 12 local 501(c)(3) non-profit organizations that have agreed to support the fellows’ proposed projects.

“As we face the crisis of the COVID-19 pandemic, more and more people are turning to poetry for comfort and courage. We are honored and humbled in this moment of great need to fund poets who are talented artists and community organizers, who will most certainly help guide their communities forward,” said Jennifer Benka, President and Executive Director of the Academy of American Poets.

Through its Poets Laureate Fellowship program, the Academy has become the largest financial supporter of poets in the nation. The fellowship program is made possible by The Andrew W. Mellon Foundation, which, in January of this year, awarded the Academy $4.5 million. The award will fund the program in 2020, 2021, and 2022.

“We are gratified to support the poets laureate fellows as they engage their communities around the unprecedented challenges of our moment, making work that provides meaning, brings beauty, and helps us, in Lucille Clifton’s words, ‘sail through this to that,’” said Elizabeth Alexander, poet and President of The Andrew W. Mellon Foundation.

Additional information about the Academy of American Poets 2020 Poets Laureate Fellows and their projects is available on the Academy’s website.

About the Delaware Poet LaureateDelaware’s Poet Laureate is an honorary position appointed by, and serving at the pleasure of, the Governor. The Poet Laureate serves as an advocate, educator, and presenter of poetry throughout the state. Delaware’s Poet Laureate program is managed by the Delaware Division of the Arts. The Division promotes the Poet Laureate’s events and activities and manages the calendar of appearances and provides a stipend to the Poet Laureate for appearances at nonprofit organizations. More information about the program is available at: https://arts.delaware.gov/poet-laureate/.
Posted by Arts in Media No comments:
Email ThisBlogThis!Share to TwitterShare to FacebookShare to Pinterest
Labels: 2020 Poets Laureate Fellows, Academy of American Poets, Al Mills, Delaware Division of the Arts, Delaware Poets Laureate, Nnamdi Chukwuocha, Poetry, Twin Poets

DiAE 'Spotlights' the Arts in Delaware in Signature Event

Delaware Institute for the Arts in Education (DiAE) will host Spotlight, An Evening of the Arts on Wednesday, May 8, 2019 at The Queen in Wilmington. DiAE will also honor Delaware's 17th Poets Laureate, the Twin Poets — Delaware State Representative Nnamdi Chukwuocha and Al Mills. 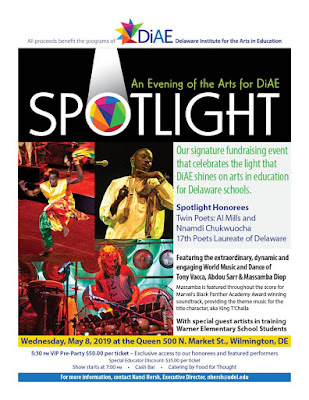 A VIP pre-party kicks off the evening with fare from Food for Thought, a cash bar and a teaching artist experience with Jason Keller of J.K. Percussion. The main event will include a rousing West African drumming and dance performance by artists Tony Vacca, Abdou Sarr and Massamba Diop — who is featured throughout the Academy Award-winning score of Marvel's Black Panther. Guest artists-in-training from Warner Elementary School will have the opportunity to share the stage with the performers.

DiAE has designed educational experiences with Warner and Stubbs Elementary Schools to prepare students for the performance. Prior to the event, students will participate in an immersive workshop series facilitated by DiAE teaching artist Jason Keller. Students will have the opportunity to learn traditional West African rhythms and play them in unison, experience poly-rhythm techniques and create an ensemble piece to share with their peers. Fifth Grade students from Warner will participate in West African music and dance workshops with Tony Vacca and Abdou Sarr.

The DiAE school arts-integrated residencies, performances and workshops are supported by Light Up the Queen Foundation, with additional support from Children and Families First Delaware, Warner Shortlidge Arts Alliance, Red Clay Consolidated School District and the Delaware Division of the Arts, in partnership with the National Endowment of the Arts.

'Provocative Pairings' with a Pair of Poets

By Christine Facciolo
Artistic endeavors which cross boundaries can be highly exciting affairs. This is especially true when composers and poets collaborate, because their art forms naturally flow well together and magic happens.

Mélomanie and The Twin Poets created that sort of magic at the ensemble’s final concert of its 25th season Sunday, April 8, 2018 at The Delaware Contemporary. The audience contained lots of new faces as well as regulars, who said this was the best Mélomanie concert they’d ever attended.

The Twin Poets are Al Mills and Nnamdi Chukwuocha. Governor Jack Markell bestowed the shared title of Poets Laureate on them in December 2015, praising them for their artistic excellence and extensive experience in outreach to underserved communities as well as their love of poetry and the spoken word would benefit all Delawareans.

The brothers told the audience how they developed a love for writing: when they were growing up, their mother made them work out their disputes by writing to each other.

As adults, their poetry is deeply rooted in their social work. The sons of William “Hicks” Anderson, an activist in the local Civil Rights Movement, an advocate for children and namesake of the community center in West Center City, the twins have carried on their father’s legacy of speaking for the most vulnerable. Selections on this program spoke of street life and the challenges of poverty, absentee parents as well as those who would sooner buy drugs than provide for their children.

Particularly powerful was Mills’ account of a veteran suffering from PTSD while grappling with the guilt of his wartime deeds, actions his commanders termed “patriotic” at the time.

The tone as reflected in the music by Mark Hagerty and Jonathan Whitney addressed the cultural, political and social dissonances in American society. Telemann’s Chaconne in E minor added a wistful afterthought.

There were messages of hope as well. Some poems spoke of the power of education, personal responsibility, self-determination and working toward a dream.

The program also featured selections from Aegean Airs composed for Melomanie in 2013 by Robert Maggio, chair of the Department of Music Theory, History and Composition at West Chester University. Like Mélomanie’s 'provocative pairings of early and modern music,' Maggio’s work draws on compositions from Ancient Greece as well as the pop-folk music the composer heard while on vacation one summer in Greece.

The program concluded with the world premiere of the twins’ just beautiful United Sounds of America with music by Mark Hagerty adapted from Robert Glasper’s Gone which itself is after Miles Davis.

Creating 'Provocative Pairings' with a Pair of Poets

This post is from an excerpt of Out & About magazine's April 2018 issue...


Musical quintet Mélomanie prides itself on creating what they coin “provocative pairings” in their music and partnerships. This month is no different (yet very different), as they celebrate a first-time collaboration with phenomenal spoken-word duo Nnamdi Chukwuocha and Albert Mills, known as the Twin Poets and Delaware’s current Poets Laureate.

In a program entitled United Sounds of America, two performances — Saturday, April 7, at 4:00pm and Sunday, April 8, at 2:00pm — will be presented at The Delaware Contemporary, completing this mash-up of artistic genres. Guest artist Jonathan Whitney will join them on percussion.

The Twin Poets are thrilled at the prospect of this new artistic endeavor. “We’re honored to share the stage with Mélomanie,” Chukwuocha and Mills say. “Through music and spoken-word, we’ll depict the challenges, hopes and aspirations of our great nation. Throughout America’s proud history, the most significant moments have always been when we stood united, demonstrating our true strength. In response to the chaotic divisiveness spreading throughout our country and world, this performance will ‘build a wall’ of love and empowerment, highlighting the transformative power of the arts.”

“I deeply admire the work of the Twin Poets,” says Mélomanie Artistic Director Tracy Richardson. “Their words and performances articulate the human situations of our time and the human condition of any time, contemporary or ancient.”

Mélomanie asked the Twin Poets for the opportunity to combine their respective art forms and offer a new experience to audiences. “We’re continuing in the earliest traditions of the union of poetry and music,” says Richardson.

Richardson says audiences can expect new poetry and favorite past works from the Twin Poets as well as new and favorite music from Mélomanie. For the performance, the Twin Poets have created a poem reflective of the event title, United Sounds of America.

The ensemble and duo will perform together and separately during the program, with composer Mark Hagerty creating and arranging music to accompany the Twin Poets. Mélomanie will perform contemporary regional composer Robert Maggio’s Aegean Airs and German Baroque master Georg Philipp Telemanns’ Chaconne.

Tickets are $25, $15 for Delaware Contemporary members and students 16 and older. Those up to age 15 are admitted free. Advance purchase is recommended at melomanie.org.

This post compiled with info from delawareonline.com and WHYY's newsworks.org...
Delaware Arts Info is happy to celebrate spoken-word artists Al Mills and Nnamdi Chukwuocha --- known regionally as The Twin Poets --- as the First State's new Poets Laureate. As Delaware's 17th ambassadors of poetry, they are also the first to share the honorary title.

The 45-year-old identical twin brothers have been writing since they were children. Their prose have been featured on HBO’s Def Poetry Jam and NPR’s Poetic License, and the pair has won numerous awards and toured nationally and internationally as part of their craft.

The duo were sworn in to their new appointments by Governor Jack Markell in a December 16 ceremony at the Delaware Art Museum. "You have got something to say that I think people need to hear," Markell said during the event. "People from all walks of life, who may not have ever come together otherwise, are going to hear this message."

The two performed separate poems following the oath of office, with Mills reciting a new work entitled, The Beauty of the Journey. Mills and Chukwuocha hope not only to introduce children statewide to the art of prose but also to share their artistry through outreach to military bases, jails and prisons in Delaware.

The Poet Laureate program is overseen by the Delaware Division of the Arts, which coordinates performances and associated programming for the the artists throughout the state.

Both men are social workers, and Chukwuocha is a Wilmington city councilman. Their father was community leader William “Hicks” Anderson, for whom the center on Madison Street is named.