The Real Thing at the Chapel Street Players 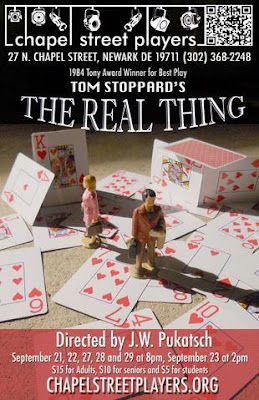 Tom Stoppard’s 1982 play, The Real Thing, is a beautifully constructed kaleidoscope which shows us how relationships ebb and flow and gives us the fly-on-the-wall view that would never be possible to have in real life.


The play has so many British cultural references that the cast took the challenge and all mastered some very good British accents and Thomas Russell, who played Billy, mastered a natural and convincing Scots accent. They pulled off the Stoppard word-play quite blithely even though the full and mostly American audience on opening night did not always understand the joke.


The characters are mostly actors and playwrights and it is perhaps for that reason that they find it so hard to communicate in a straightforward manner. Two philanderers in the crowd even find it impossible to tell their spouses they want to leave them until they finally get caught (Phew!). Before long, though, one of the flighty lovebirds decides they need to stray from the new relationship.

Stoppard could have been and supposedly was writing about his own life. He left his first wife to take up with an actress in one of his plays. But whether or not he meant to write a biographical essay, he went quite deeply into the psychological aspects of relationships, illustrated their shortcomings, and ended his play with an optimistic view of love. 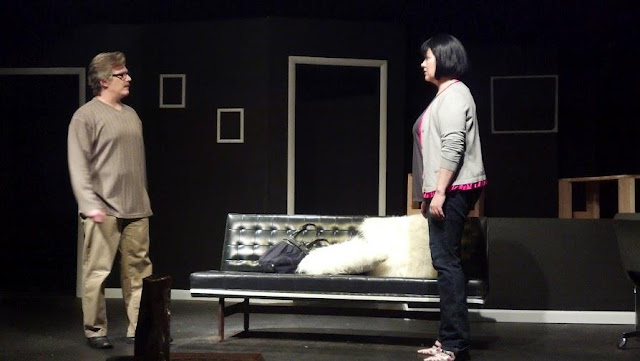 Jeremiah Dillard as Henry and Georgiana Staley as Annie (above)did a wonderful job of showing how the first blush of love wears thin quickly in a passionate affair. Their development after they move in together is what makes the play an absorbing study of life and love. When Brodie the soldier appears in their flat after years of influencing Henry and Annie from afar, they both realize where their priorities lie. Their final scene provides an end to their constant search for something better.
The Real Thing runs September 21st, 22nd, 27th, 28th, 29th at 8 p.m. and September 23rd at 2 p.m.