It Ain’t Yo’ Mama’s Shakespeare: CTC Straight Killin’ it with 'Bomb-itty'

By Guest Blogger, Amanda Curry
Amanda is the Director of Communications for the Delaware College of Art & Design in Wilmington. 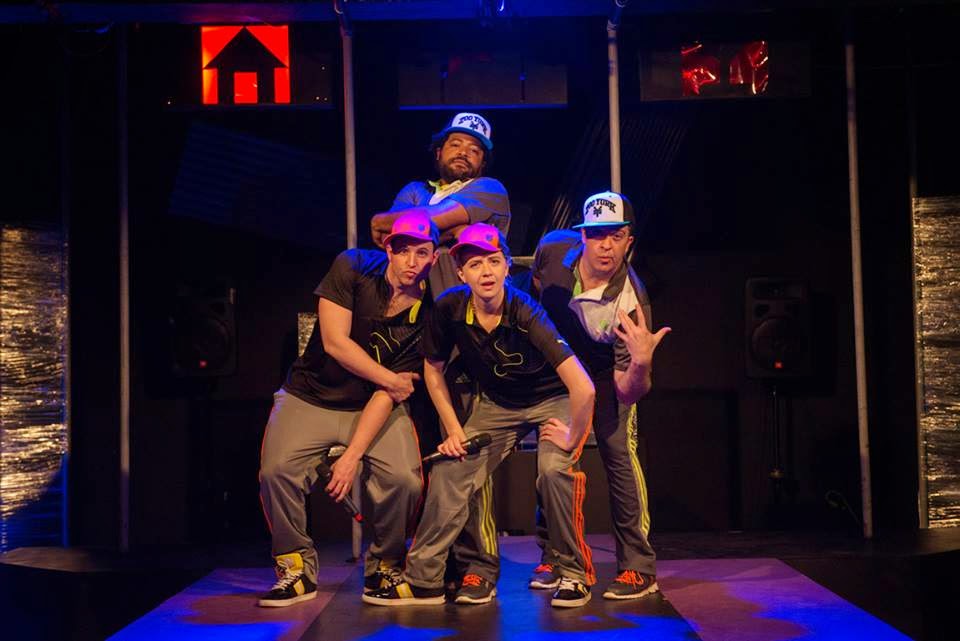 Yo’ Mama jokes. Adidas track pants and sneaks. Rappin’ and beatboxin’… Shakespeare?! Walking in to CTC’s production of The Bomb-itty of Errors, you’re in for an atmosphere more reminiscent of a strip club/disco than a theater, complete with a DJ droppin’ beats throughout and four poles on stage (and yes, they are used for that purpose...hilariously misused, but you’ll see). This four-actor + DJ production is a fast-paced, high-energy, “add-raptation” of Shakespeare’s Comedy of Errors.  The show is campy, raunchy, fun and hilarious, but, you want to go in with some understanding of Comedy of Errors, otherwise you’ll get totally lost and miss a lot of the funny. And there is a lot of funny.

That said, check out a run(DMC)-down of the plot here. The gist is two sets of identical twins — one pair both named Antipholus and one pair both named Dromio — born to a legendary MC of his time and his wife.  They are forced to give the kids up for adoption and the twins are split — one Dromio and Antipholus grow up in Syracuse and the respective pair in Ephesus — each unaware of their counterpart until the end of the show. The plot gets more complicated as the show goes on, but that’s part of the fun.  As the confusion escalates, so too does the hilarity, as a variety of zany characters are introduced, all played by the same four actors.

The show is an interesting mix of Shakespearean rhyme and modern hip-hop references, set in present day NYC.  Admittedly, I was skeptical at first.  However, I was pretty much won over and thoroughly impressed with all four of the performers’ skills on the mic, as the entire show is rapped/sung.  Shakespeare alone is tough enough to spit out, but rapping Shakespeare?  Impossible.  And these guys really do tackle it like pros.  All four performers play multiple characters, signified by a simple wig/costume piece change. The stage itself — designed by Richard A. Kendrick — is pretty simplistic: the DJ in the middle and two screens on either side.  But the atmosphere is complemented well with occasional strobe lights and red gel cutouts that light up to signify three important locations: home, bar and church (lighting design by Vicki Neal).  Actors move in and out of the playing space to change behind screens, pretty much in view of the audience, so there’s quite a bit of meta-theatre happening. The staging and choreography is fun and funky complete with a whole lot of booty shakin'.  I especially loved the homage to N*Sync with a little “Bye, Bye, Bye” dance.  Mad props to Kerry Kristine McElrone and Lauren Peters for their dope costume design (i.e., choosing the track pants and sneaks that the twins wear).

The first pair of twins we meet are Dromio of Syracuse (played by Chris Banker) and Antipholus of Syracuse (played by Dyan Geringer).  Patrick O’Hara and Brendan Sheehan play the respective pair of Antipholi and Dromio(i?) of Ephesus. It was hard to choose a favorite performer/scene, as all four do a pretty commendable job of keeping you laughing for nearly two hours.  DJ Swizzul (Trent Marsh) on the turntables during the entire show provides the perfect accompaniment for these four.  Dylan Geringer (a CTC "regular") shines as the one female cast member, especially as the character of Hendelberg, a Jewish rapper/jeweler with a knack for hilariously awful “yo’ mama” joke telling.  She’s such a versatile performer and her comic timing is spot-on, as was consistent with all four actors. Patrick O’Hara plays a cross-dressing Luciana, and his interchanges with the super-funny Brendan Sheehan as a sassy Adriana, wearing a yellow sports bra and donning a red wig, are phenomenally witty, silly and fun.  More characters are introduced, including an Irish cop, a Rastafarian herbal doctor, a nerdy bike messenger, and a stripper named Desi, just to name a few.  Under Michael Gray’s direction, assisted by Tommy Fisher-Klein, the speed and seamlessmness with which the performers switch characters is nothing short of impressive.

Bomb-itty is totally irreverent and although maybe not appealing to your grandmum — unless she's a sassy, rappin’ grandma, a la The Wedding Singer — it would be entertaining to the teens in your life.  Or, looking for a fun date night? Then, get-thee-to-Bomb-itty-and-you-will-see-some-hilar-ity.  Just be sure to read that synopsis first…ya heard?!  Check it: Bomb-itty runs now through May 17 at the Black Box at OperaDelaware Studios.