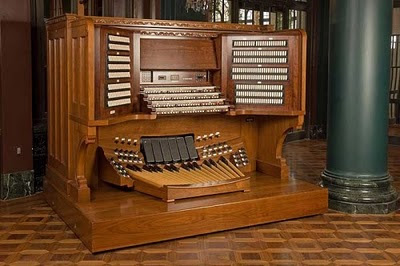 Normally we don’t blog non-Delaware events, but since this was a DuPont event just up the road from the Delaware border, it would seem churlish not to write about one of the most affable and accomplished musicians around: Peter Richard Conte, Grand Court Organist for the Wanamaker organ in Philadelphia who played the re-dedication concert on the restored Aeolian symphonic organ before a sold-out crowd including Maestro David Amado, Nathan Hayward and Governor Pete Dupont. (Tickets sold out the day they went on sale in September 2010.)

Staff at Longwood tell me that in the weeks before the concert, Mr. Conte would come to practice after the restoration team had put away their drills late at night and stay for hours – and then would sneak in at the crack of dawn to play some more before the restorers arrived to work on the project, handing the banished musician coffee as a consolation.

But not only did Peter Richard Conte play an incredibly difficult program on Friday, February 4, having carefully prepared exploited as many of the stops and whistles as possible, but he wrote a brief erudite yet humorous introduction for every piece. He had known Firmin Swinnen, the first concert organist in residence who helped design the Aelion symphonic organ. Mr. Conte played some of his works – and made sure a computerized of an actual performance by Mr. Swinnen was featured.

But I salute Mr. Conte not just for his mastery of music, but for his outstanding affability. He stayed after the concert, was easily approachable and friendly to all – young and old, allowing them to enjoy the experience of knowing a true artist.

He returned in the morning for a more technical demonstration of the organ and answered all questions from young and old with eagerness, humor and respect.

Bravo, Mr. Conte and kudos to Paul Redman for taking the initiative to invest in restoring Longwood to its former elegance.