Psst...There's a 'Rumor' About a Great Play at WDL

Although a bit of a period piece (from 1988), Neil Simon’s closest attempt at farce rings true today. Yes, one must suspend disbelief that any mover and shaker’s reputation would be seriously threatened by the scandal of having a friend who attempted suicide. Today’s confessional culture lauds such faux-empathy as being “authentic.” Emphasis on faux, since the true motivation is self-interest. And it is relevant today, since such potential-scandal-in-the-making leads those in power, as many characters in Rumors admit, to make things up.

In a nutshell, it’s rich people behaving badly. And it’s hysterical how they become contortionists, mentally and often physically, to serve their own self interests.

Director Luke Wallis has assembled a terrific ensemble cast who do not fear, nay embrace, the opportunity to look foolish. Given my experience with runaway train farces, I worried that they’d started at too high a pitch, which could get irritatingly screechy after 2+ hours. And here I give a nod to Mr. Simon, who often takes the most-recently-over-the-top character off stage for a while to cool the heck down. Above I called this Mr. Simon’s “closest attempt at farce.” But now I see it more as his re-imagining farce. In a good way.

Still, my farce radar makes me count doors — there are five in this gorgeous set designed by Helene DelNegro. Director Luke Wallis moved his large cast around this playground with great fun.

So yes, the context, the script, the set are all great. And now I must direct my praise to the ensemble cast. These actors portray four couples, and each pairing artfully portrays a well-delineated state of marital bliss…or lack thereof. That is, until Act 2, when the increasingly ridiculous subterfuge requires many of them to pretend to be married to someone else.

The audience delights that the characters are just a confused as we are!

Within this ensemble, each actor also gets a chance to shine. All are excellent, yet I must highlight two. Melissa Davenport’s portrayal of odd-duck Cookie Cusack is a deliciously kooky mash-up of Julia Child and Madame Arcati — aided by the perfect costume by Laurene Eckbold. And Zachary Jackson as Lenny Ganz repeatedly “Goes to Eleven” (Spinal Tap reference) at personal risk to life and limb. Jackson’s character is the most noted recipient of Mr. Simon’s wisdom to give an over-the-top character a time out, because when he comes back with a lengthy and absolutely absurd monologue about what “really happened,” we are eager to go along with him for the ride.

Do yourself a favor — go belly laugh for a couple hours at someone else’s expense. It’s not mean-spirited; it’s exactly what the Rumors company is going for!

Over the Moon About WDL's Production 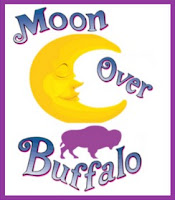 Ever wonder what goes on in the Green Room before a theatrical performance? Moon Over Buffalo offers a peek…plus a whole lotta laughs at Wilmington Drama League.

The year is 1953. The setting is Buffalo, New York (“Scranton without the charm.”) A touring company is performing Edmond Rostand’s Cyrano de Bergerac and Noel Coward’s Private Lives at the Erlanger Theater. George and Charlotte Hay (Alan Harbaugh and Sabrina Justison) boast a long-standing marital and acting partnership, both of which have frayed at the edges. Then they learn that the great film director, Frank Capra, needs to re-cast a movie he’s making and is flying in from New York City to see them perform. This could be just what they need to recoup the stardom they’ve lost and feel they so richly deserve.

George has impregnated Eileen (Carolyn Peck), a young actress in the troupe. When Charlotte finds out, she tells him she’s fed up with his infidelity and is leaving him for their lawyer, Richard (Shawn Klein). Meanwhile, Rosalind Hay (Patricia Egner) has arrived to introduce her parents to her fiancé, Howard (Andrew Dluhy), a TV weatherman. He’s a geeky but affable TV weatherman who just happens to be a big fan of her parents. He loves Rosalind but is absolutely clueless about what’s going on, Rosalind, for her part, was in love with Paul (Luke Wallis), the Hays’ theatre manager, who still has feelings for her. Adding to the merriment is Ethel (Patricia Lake), Charlotte’s deaf-as-a-post stage mother who hates the boards George treads on and nearly brings him down with one innocent-looking coffee pot. Comic misunderstandings and mistaken identities abound.

Ken Ludwig’s 1995 madcap farce is still fresh in 2017 and just the ticket for an evening full of fun and laughter. Let’s not forget that this play was worthy enough to lure Carol Burnett back to Broadway after a 30-year absence and, if you didn’t know better, this superb production might have you believe you’re sitting in a theatre on the Great White Way. It’s that good.

Harbaugh and Justison simply melt into their roles. Harbaugh is brilliant as the very inebriated George. Peck applies just the right amount of affect to her role as the pregnant and distraught ingénue. Dhuly is convincingly clueless as the action swirls around him. Egner, Klein and Wallis know every nuance of their characters. Lake is downright hilarious as the hard-boiled stage mother/mother-in-law from hell.

Kudos to the directorial team of Gene Dzielak and Melissa Davenport (as well as mentor/director Ken Mammarella) who pulled everything together. Also deserving of a standing ovation are Helene and Tony DelNegro for their retro 1950s backstage set, Cara Tortorice for her fabulous costumes and Lee Jordan for choreographing the playful duel between the Hays.

This one is not to be missed.