Lend Us an Ear: 'Lend Me a Tenor' is a Heckuva Hit!

By Carol Van Zoeren
Carol is a 40+ year veteran of community theater and retired from DuPont. 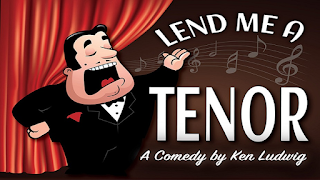 Lend Me a Tenor (running at Candlelight Theatre now through June 23) is a six-door farce by prolific playwright Ken Ludwig. Originally produced in the late 1980s, the premise is that a world-famous operatic tenor, Tito Merelli (Paul McElwee), is coming to guest star with a mid-tier opera company. All involved are desperate and determined that this be a success, to raise their standing (individually and as a company) in the opera world.

“Desperate and determined” is an excellent foundation for a farce. And each actor has taken this idea to heart. Heading the action is Max (Jared Calhoun), beleaguered yet ambitious assistant to the Company’s General Manager, Saunders (David Wills). Calhoun and Wills clearly enjoy playing off one another. Their scenes crackle, reminiscent of Bialystock and Bloom in The Producers. I must commend these actors who, in an extremely long nose-to-nose silence, manage to keep a straight face so the audience can laugh, at first uncomfortably, and eventually raucously.

McElwee conveys the arrogance of an international opera star, but he really shines when he too becomes desperate and determined. As his wife, Rebecca Schall embodies the hot-tempered Italian firebrand. Hallie Hargus as Maggie, Saunders’ daughter and Max’s girlfriend, captures the rebellious streak of emerging womanhood. Julia Kershetsky plays Diana, the opera’s sultry soprano star. Hargus and Kershetsky are hysterically naughty in their parallel illicit trysts. Gerri Weagraff nails the flighty society type, and rocks a costume that’s another nod to The Producers. Rounding out the cast is Anthony Connell as the star-struck Bellhop. While Connell is an excellent lead actor, he is also a master of smaller roles. He bides his time in the background, and finds the peak moment and precise delivery to wring all the goody out of his few lines.

While the individual performances are all excellent, what truly elevates this production is the ensemble as a whole. There are short-burst, back-and-forth between two or more actors, and the timing is impeccable, punctuated by the precise slamming of doors. I have noticed this before in Bob Kelly shows: each actor is good, and their ensemble work makes the show great. Kudos to him, and to the cast for doing the hard work to get this timing spot on. And another thing — under a less-disciplined director and cast, farces can accelerate to runaway trains, leaving the audience as exhausted and confused as the actors. Kelly and cast intersperse short-burst mania with slow burn comedy, carefully mining the text for the best laughs.

On the technical side, the costumes were effective. I mentioned Weagraff’s above, but also note the Pagliacci costume, makeup and hair that made the mistaken identities totally believable. (Oops, maybe that was a spoiler. Sorry.) And kudos to the scenic designer, Envision Productions. It’s not easy to build a set with doors that are robust enough to endure this much slamming.

Oh, the curtain call is a special treat. Jus’ sayin’.

Bottom line? Candlelight’s production of Lend Me a Tenor is a heck of a lot of fun. Sit back and enjoy!
See www.candlelighttheatredelaware.com.

Footnote: In the original late 80s version, Merelli was going to star in Othello, in blackface. Guess that seemed funny at the time. Thankfully, this has been updated to Pagliacci, with the tenor in clown face.
Posted by Arts in Media 2 comments:
Email ThisBlogThis!Share to TwitterShare to FacebookShare to Pinterest
Labels: Anthony Connell, David Wills, Gerri Weagraff, Hallie Hargus, Jared Calhoun, Julia Kershetsky, Lend Me A Tenor, Paul McElwee, Rebecca Schall, The Candlelight Theatre
Older Posts Home
Subscribe to: Posts (Atom)