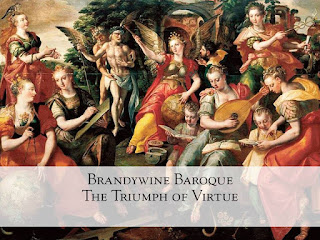 If Brandywine Baroque’s impressive inaugural concert of the new season is any indication, we can look forward to a year of eclectic and interesting programs.

This past weekend’s series, called The Triumph of Virtue, was held Friday and Sunday, October 12 and 14 at The Barn at Flintwoods and Saturday, October 13 at The Lutheran Church of Our Savior in The concerts featured instrumental and vocal works by a range of composers (including several obscure ones) from , and .

The afternoon opened with an excellent rendering by Davids and Rosendaal of the thematically rich and technically demanding first violin sonata by Joseph Gibbs (1698-1788). Published in 1748, the sonata is one of eight exhibiting the Italian influence of Corelli and Geminiani. Especially charming were the expressive , Aria Andante and a series of Variations of real interest, excitement and beauty.

Next up was Vitali’s Partita sopra diverse sonata (c. 1680), featuring Heather Miller playing the violone. It was a rare treat to hear the virtuosic capabilities of this deep-throated instrument in this rarely heard four-movement work.

The prolific Dietrich Buxtehude was represented by two works from his set of six sonatas. The Sonata in A minor (?1694) — a true ostinato sonata — brought Davids, Fournier and Rosendaal together for a vigorous performance that demonstrated their technical mastery, playing concerted solo passages alternating with segments in which they exchanged parts.

The violone made yet another appearance in the Sonate a 2 in G minor (1610) by Giovanni Paolo Cima, a composer better known for his religious compositions.

The Quatrieme Sonate in E minor (1713) by Jean-Fery Rebel featured some exciting music in the best French baroque style. Davids played every line with affected commitment while his collaborators — gambists Fournier and Rosendaal and harpsichordist — enriched the texture and expressiveness of the music.

The concert also introduced attendees to the secular side of English composer William Croft. Known primarily as a composer of church music, Croft also wrote a set of six sonatas for violin which do not get performed or recorded nearly enough, even though they are in fact some of the earliest examples of English sonatas for the instrument.

Davids’ account of the G minor sonata was thoroughly accomplished in terms of dramatic phrasing and rhythmic vitality. Harpsichordist emerged equally strong, reveling in the sonata’s unusually elaborate bass parts and accompanying with insight and style.

Continuing this nicely varied afternoon of music were three cantatas exquisitely performed by soprano Laura Heimes: John Stanley’s Compell’d by sultry Phoebus’ Heat (1742); Rameau’s L’Impatience (c. 1715-22); and Bousset’s Le Triomphe de la vertu (1735). The ever-dependable Heimes delivered them with persuasion and commitment in a wonderful reading. As always, she was remarkably adept at the style, offering a lithe and bouncing artistry that really brought the music to life.