By Morgan Silvers
Morgan is a high school senior who enjoys playing sports like field hockey and soccer, and loves spending time with friends. She notes she's happy to have a chance to help write about events and media! In the future, she hopes to pursue a career in either Fashion Merchandising or STEM.

BRANDYWINE BAROQUE
Delaware's ensemble where "early music lives" has shifted performances into the virtual realm. Currently in the middle of their 2020-2021 Virtual Concert Series, their "Concerts at the Flint Collection" can be viewed virtually.

Their series includes performances by ensemble and guest artists and features works from their recently released CDs. All performances premiere Sundays at 3:00pm (EST) on Brandywine Baroque's new Vimeo channel.

The ensemble schedule premieres new performances approximately every two weeks. Each performance is about 30 minutes in length and is free to view.

The next concert will premiere Sunday, November 22 at 3:00pm and will feature Brandywine Baroque Artistic Director Karen Flint, performing Pieces in G minor by Jean Henry D’Anglebert on the 17th-Century French Ruckers harpsichord.

To join and view this (and each new) performance, visit https://vimeo.com/475203801. All of Brandywine Baroque’s virtual concerts are available to watch anytime on Vimeo throughout the 2020-2021 season about a day after they have premiered. Be sure to watch!

MARKET STREET MUSIC
Downtown Wilmington's most diverse musical series, Market Street Music, has moved to an online platform as well. Three performances will be offered this fall, each in a two-part concert on their new YouTube channel. 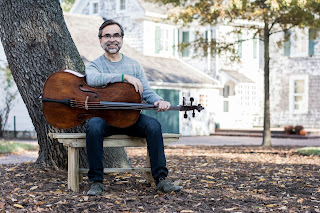 Part One of the first performance has already premiered this weekend (Saturday, November 14) and featured cellist Ovidiu Marinescu — a seasoned player of the beloved Bach solo cello suites. In this concert, patrons can enjoy some of those suites along with new music from Ovidiu himself. Part Two premieres Tuesday, November 17 at 7:45pm.

Patrons who join at the premiere times can chat live with Market Street Music and fellow patrons during the performance! CLICK TO WATCH!

MÉLOMANIE
For their 2020-2021 season, the ‘provocative pairings’ ensemble presents a series of five 30-minute streamed concerts, called Mélomanie's Virtual Series, putting fans in the 'virtual front row'! Their performances will include the ensemble's signature baroque and contemporary repertoire as well as interviews with guest composers. 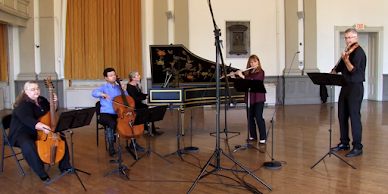 The first concert premieres Saturday, November 21, at 3:00pm via their new Vimeo channel. The first program will include Mélomanie performing Telemann’s Paris Quartet in A Major and Aegean Airs by Robert Maggio; a cello solo by Ismar Gomes of Abraham's Sons - In Memoriam: Trayvon Martin, composed by James Lee III; and brief interviews with composers Robert Maggio and Mark Hagerty with guest percussionist Chris Hanning. Patrons need only click on the Vimeo link on November 21 to view the premiere performance!

Their follow-up concert is scheduled for Saturday, December 12, at 3:00pm.

All concerts will include post-performance "virtual receptions" via Zoom with the artists, and fans can also participate in live chat with each other during performances. After each performance, fans can also enjoy access to full-length, in-depth interviews with guest composers by clicking here.
Posted by Arts in Media No comments:
Email ThisBlogThis!Share to TwitterShare to FacebookShare to Pinterest
Labels: Brandywine Baroque, Ismar Gomes, Karen Flint, Mark Hagerty, Market Street Music, Melomanie, Ovidiu Marinescu, Robert Maggio

Mélomanie welcomed a new season on Sunday, October 7, with a new venue, a new cellist and a couple of eclectic works new to Delaware audiences.

The award-winning ensemble, known for its provocative pairings of early and contemporary works, has established a relationship with the Delaware Historical Society, which will host its Wilmington performances at Old Town Hall adjacent to the organization’s museum on North Market Street in downtown Wilmington.

Mélomanie also welcomed the addition of Ismar Gomes, award-winning cellist who has performed throughout the U.S. and Europe as soloist, recitalist and chamber musician.

The season-opening concert also served to introduce first-time audience members to the ensemble’s repertoire as well as the individual talents of its musicians as each performed a solo work showcasing his or her capabilities.

The entire ensemble opened the program with a technically accomplished and courtly rendering of Couperin’s La Sultane, one of the composer’s most colorful instrumental works.

Gomes joined with gambist Donna Fournier for a performance of Jean Daniel Braun’s Sonata Sesta in D major for two bass instruments. It’s not often that two such instruments get paired in a composition, so this was a rare treat indeed. Their beautiful burnished tones produced goosebumps, especially in the slower movements.

Fournier gave a splendid performance of Telemann’s intimate but technically difficult Fantasia in G minor, one of 12 works discovered in 2015.

Flutist Kimberly Reighley (also co-artistic director) offered one of the most interesting pieces of the afternoon. Le Vent a Travers Les Ruines by Yuko Uebayashi. Reighley’s pristine tone and perfect intonation underscored the placid, non-judgmental character of the work, the later stages of which explore the instrument’s lower register as it moves to bring this intriguing work to an understated conclusion.

The ensemble (sans cello) regrouped for the Delaware Premiere of Christopher Cook’s ethereal Hubble’s Eye, a multimedia musical interpretation of the jaw-dropping images taken by the Hubble space telescope.

While one might be tempted to draw comparisons with Holst’s The Planets, Cook has undoubtedly imbued this seven-movement work with his own voice. Saturn is mysterious yet delicate. Mars is definitely a strong character with decisive rhythms and emphatic chords but hardly bellicose. The work exhibits some programmatic elements as well: the harpsichord “climbs and descends” the Mystic Mountain of the Carina Nebula, while the Supernova Bubble is buoyant and whimsical.

The trio of Reighley, Richter and Richardson concluded the event with another Delaware Premiere, Café au Triolet by Cynthia Folio. Folio, a Temple University music professor, wrote the work for Ensemble Triolet, which premiered it in 2016 at the National Flute Association Convention.

The first movement (Caramel Macchiato) takes the instruments out of their comfort zones to explore the full range of their capabilities. Special attention is given to the harpsichord, which Folio says she got to know up close and personal in the harpsichord room at Temple’s Boyer School of Music. The second movement (Café do Brazil) is a lively fugue spiced with Brazilian rhythms and harmonies. 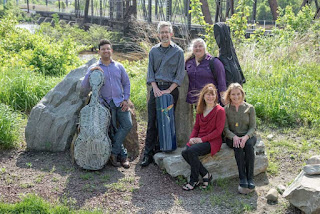 Mélomanie — the Delaware music ensemble known for ‘provocative pairings’ of baroque and contemporary works — celebrates its 26th season with a Launch Party & Concert on Sunday, October 7, at 3:00pm in their new performance home, Old Town Hall of the Delaware Historical Society in downtown Wilmington.

The event, which leads off at 2:00pm with a wine & cheese reception and tours of the Delaware Historical Society, will feature the Delaware Premiere of two pieces — Hubble's Eye by Christopher Cook and Café au Triolet by Cynthia Folio. Hubble’s Eye will be performed with accompanying video projection of photos taken by the Hubble Deep Space Telescope.

Tickets for the performance are $25; $15 students age 16 & older; youth through age 15 are admitted free. Tickets can be purchased at melomanie.org or at the door via cash or credit. The Delaware Historical Society is located at 505 N. Market Street in downtown Wilmington.

This season, Mélomanie will present new music by composers Suzanne Sorkin, Richard Belcastro, Roberto Pace, Christopher Cook and Larry Nelson. From the baroque era, they will perform works of Couperin, Telemann, Abel and Rameau throughout the season. Also new this year is a special collaboration with Delaware jazz composer Jonathan Whitney and his quintet