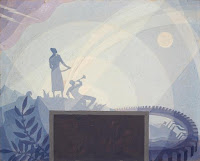 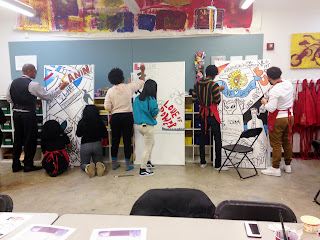 The info in this article comes from a Delaware Art Museum press release...
In honor of Black History Month, the Delaware Art Museum unveiled an Aaron Douglas-inspired mural created by local high school students. The February 4 unveiling ceremony included a short presentation during which the participating students and the project leader -- arts educator/artist Chad Cortez Everett -- spoke about the process.

The mural is part of the Museum's Mural Arts Interpretation Project, a student-art initiative created last fall with the goal of exposing under-served students -- who have not taken part in an art class or had access to art education since middle school -- to meaningful art education while raising public awareness of cultural diversity. The project includes eight high school students from William Penn and Dickinson High Schools.

The students' mural is a large-scale painting inspired by Study for a Mural by Aaron Douglas, an African American illustrator and muralist and important Harlem Renaissance artist.Study for a Mural (c.1963) -- currently on view in the Museum's modern American Art gallery -- was a mural design for the home of Dr. W.W. and Mrs. Grace Goens, a prominent African American family in Wilmington. Douglas painted two murals for the Goens family, and this study presents his design for the second mural for their Hockessin home in 1964.

Over the course of 10 weeks, Everett and the students met to discuss how to preserve the spirit of Douglas' work while transforming it to reflect themselves and today's society. After learning about Douglas and the Harlem Renaissance from Curator of American Art Heather Campbell Coyle, the students discussed the world they live in and how it might differ from Douglas' era. The students incorporated text from their discussions into the design and learned how to transfer an image to large canvas panels.

The words the students discussed and chose were born out of the original themes of the piece: African American history, cultural significance, and societal progress. As the students planned the mural design, they developed images and symbols that serve as important markers of their own personal histories. After a discussion about monochromatic color (as Douglas typically painted) the students chose to use local color and edit as they went, preserving a homage to Douglas' color scheme in the bottom right corner of the piece. The three-panel piece, which will be named during Thursday's presentation, will be on display on the Museum's lower level during the month of February.

The Museum is open late every Thursday evening from 4:00-8:00pm with free general admission. Special events and programs for all ages are offered on select nights throughout the year. 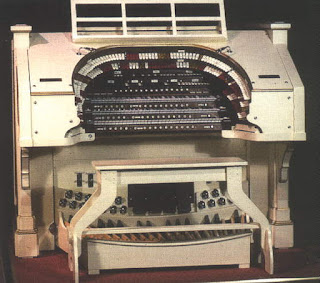