As CoroAllegro prepares to open their 2018-19 season on November 17, I had the chance to catch up with Artistic Director, Maestro Jeffrey Sean Dokken, to discuss the ensemble’s upcoming concerts.

“I am fortunate to work with such diverse and accomplished groups,” says Dokken. “CoroAllegro’s Board has given me the great opportunity to explore innovative music and build progressive concerts."

A mix of professional and experienced amateur singers, for 33 years CoroAllegro has been dedicated to performing choral literature, including less-frequently performed works. With Dokken at the forefront of the group, CoroAllegro is also performing music that speaks to today’s societal issues.

Dokken is partnering with the Delaware Fund for Women to open CoroAllegro’s season with the concert, Music, She Wrote. The performance will only include choral music written by women.

“Although women have been writing choral music for centuries, their music has not had the same exposure as their male counterparts,” comments Dokken. “We want to celebrate the great contributions female composers have made to this art form.”

Since its founding in 1993, the Fund for Women has awarded $2.3 million in grants to nonprofits benefitting women and girls in Delaware, so this was a natural partnership on a concert that focuses on exploring women’s contributions to music and society.

The concert will feature ground-breaking composers, Vittoria Aleotti and Hildegard Von Bingen, whose earliest composition is thought to have been written in 1151. The music of pioneers, Lili Boulanger and Alice Parker, and contemporary composers, Ysaye Barnwell, Jenni Brandon and Abbie Betinis, whose music has been described as “...intricate…with an inescapable allure,” by The Boston Globe.

CoroAllegro will follow up Music, She Wrote with chamber holiday concerts for private and public engagements. The season will end with a nature-themed spring concert. The music will be inspired by the natural beauty found throughout the United States and include songs featuring texts from poems on the topic.

“Our concerts this season go beyond just performing choral music,” explains Dokken. “They will emphasize two very important topics — gender equality and the environment. We have an opportunity to present choral music that’s not only entertaining but also makes a statement on our country’s current situation.”

Music, She Wrote will be presented Saturday, November 17, 2018, 7:30pm at The Music School of Delaware's Wilmington Branch at 4101 Washington Street in Wilmington. The spring concert will be held at Winterthur on Saturday, April 6, 2019. 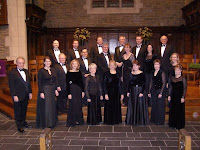