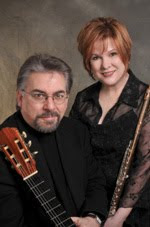 On November 21, the Taggart-Grycky Duo of Christian Taggart, guitar and Eileen Grycky, flute, played a concert at Gore Hall on the UD campus. Eileen Grycky and Christian Taggart are gifted, gracious and have the magic coordination of a duo that comes only after the decades of practice and performance.

Taggart’s arrangement of the Valse from the Suite de trois morceaux, Opus 116 by Benjamin Godard and a selection of orchestral pieces from the ballet Gayane by Aram Khachaturian showed his ability to transform both piano and orchestra to guitar without compromise.

Since they are always looking for new repertoire, the Duo commissioned a Delaware native to write a piece for them. In his composition, Double-Speaking, Peter Flint used a medley of styles that dovetailed smoothly. The piece starts with a jazzy South American theme that Flint says was inspired by the Vallanato style of Columbia. The piece moved into a modern atonal section—the syncopation of which the duo handled clearly and securely. They worked hard, though, and I was delighted to hear Grycky’s accented flute lines and a sort of “Leadbelly-effect” on the guitar, with which Taggart played unpitched rhythms for a percussion line. The recapitulation brought the listener home again with a happy landing.

Flint’s group, The Avian Orchestra, will be playing at The Barn at Flintwoods (the home venue to Brandywine Baroque) on Saturday, December 5 at 205 Center Meeting Road in Centerville, with a program entitled ChamberRock! A Modern Mash-Up. His new music organization, Avian Music, was founded to promote joint projects between emerging and established composers.

It is a privilege to hear new works played by accomplished musicians!