The Playhouse Takes a Family on Magical Trip to 'Neverland'

By Guest Bloggers Erin, Ellie & Maggie Lacey
Erin is a mom of 4 kids and works as a Business Processor for Point to Point Wealth Management in Wilmington. When not at work or home, she can usually be found costuming her kids' shows at the Delaware Children's Theater. Ellie is an 8th Grade Vocal Major and Maggie is a 7th Grade Piano major at Cab Calloway School of the Arts.

As a working mom of 4 kids, my evenings generally consist of the usual rush of carpools, dinners and mountains of homework, so I was thrilled to have a rare weeknight date with my girls, Ellie (age 14) and Maggie (age 12) to see Finding Neverland at The Playhouse on Rodney Square. In the Lacey house, music is a sport, and seeing musicals are like going to see your favorite team play. 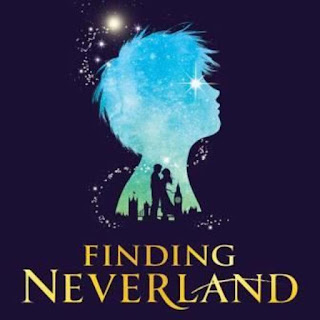 I had never seen Finding Neverland, but Ellie had when she was nine, having attended a Broadway Dreams Workshop with The Imagination Players. During that trip, they spent the afternoon with a cast member who taught them to sing and dance to Believe, one of the big ensemble numbers.

After her trip, she was thrilled to have seen a real Broadway production, but was a little fuzzy on details, as nine-year-olds often are. I was interested to see the show for myself, and to hear how Ellie's perception of the show would change now that she was five years older.

Finding Neverland tells the story of J.M. Barrie, author of Peter Pan, as he struggles to write a new play after a flop. He goes to Kensington Gardens to try to find inspiration outside and meets a group of young boys and their mother, Sylvia. Their joy in their imaginary game is contagious and Barrie finds himself leading the boys in a game of pirates and realizes that his imagination is being reawakened by play.

His closeness with the boys and their mother creates friction in his marriage, and his wild imaginings inspired by the boys are ridiculed by his producer and his actors. It is when all is darkest that he must decide if he will fall in line with societal expectations, or will he follow his heart to Neverland.

"Little boys should never be sent to bed. They always wake up a day older."

This line from Peter Pan, said by J.M. Barrie in Act 1, was the first time I welled up during the show, but it definitely wasn't the last. There were multiple times when I was reminded of when the kids were younger and we could play make-believe games for hours. The interaction between the four young actors was believable as brothers, and I wanted to scoop the youngest up and bring him home with me.

I was totally ready to enlist in Captain Hook's crew by the end of Stronger and the Gaelic-inspired Play was a joy to watch. There were some lovely quiet moments between the two leads, Barrie and Sylvia, even in times when the rest of stage was full of dancing. They would be focused on each other in the way that two people in love usually are.

But it was a look between a Sylvia and her mother during Neverland Reprise in the second act that went all the way into my heart. Because of course, to parents, our children never do grow up. Instead, when you look at them, you see them at every age, as if you have your own personal Neverland.

It's a fairly low-tech show, as far as effects, but I found the simplicity sweet and engaging. My daughters loved it as well. Ellie did indeed have a much different impression of the show at age 14 than at 9. She particularly enjoyed the message of Stronger and said that she liked how Barrie faced his "haters" and did what he knew to be right. Maggie loved We're All Made of Stars, and really loved the interactions of the boys. She said that their make-believe games made her wish it was summer so they could get back to playing all day.

There were a number of opening-night glitches with set pieces and sound, but it didn't take away from the overall 'glowy' feeling of warmth that this show conveys. By the end, you will know that your imagination is powerful and love is the best magic of all.

Finding Neverland continues at The Playhouse at Rodney Square through Sunday, February 10. Tickets range from $40-95 at TheGrandWilmington.org.

Posted by Arts in Media
Email ThisBlogThis!Share to TwitterShare to FacebookShare to Pinterest
Labels: Finding Neverland, The Playhouse on Rodney Square