There They Go Again...CTC Opens with Blockbuster for 25th

To open its 25th season, City Theater Company (CTC) presents an energetic production of Mamma Mia! in its new space — Studio One of The Grand Opera House. The beloved 1999 musical is a celebration of love, friendship and female empowerment with a nostalgic soundtrack featuring some of pop music’s favorite songs from the 1970s.

Mamma Mia! is based on the songs of the Swedish supergroup ABBA (1972-1982), one of the most popular international groups of all time. Going in, the music may seem dated, but Benny Andersson and Björn Ulvaeus crafted songs that have aged very well. The excellent “Taverna Ensemble” led by Joe Trainor had my foot tapping all night.

On a small Greek island, 20-year-old Sophie (Darby McLaughlin) dreams of a perfect wedding — one which includes her father giving her away. The problem is that Sophie doesn’t know who her father is. Her hotel-owning mother Donna (Kerry Kristine McElrone), the former lead singer of the fictional ‘70s pop group Donna and the Dynamos, refuses to talk about the past, so Sophie decides to take matters into her own hands. Sneaking a peek in her mother’s old diary, she discovers three possible fathers: Bill (Dale Martin), Harry (Nick Hunchack), and Sam (Righteous Jolly). She secretly invites all three to her wedding, convinced that she’ll know her father when she sees him. But when all three turn up, it may not be as clear as she thought. 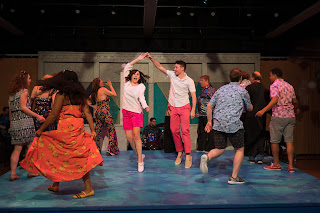 Sophie’s bridesmaids Ali (Emma Orr) and Lisa (Pam Atkinson) arrive on the island to help their friend celebrate her upcoming marriage to Sky (Trevor Fayle). The girls plan a bachelorette party while hotel employees Eddie (Jeff Hunsicker) and Pepper (Dominic Santos) are raring to join Sky on his last night as a bachelor.

Meanwhile, Donna’s former bandmates Tanya (Kat Pigliacampi) and Rosie (Dionne Williford) arrive and seem more content to rehash their days as the Dynamos. The women question why “Donna the dark horse” would allow her daughter to marry at such a young age.

Once all the principal players are on the island, full-stage musical numbers like Dancing Queen and the title track Mamma Mia almost encourage the audience to sing along. Donna and the Dynamos signature number Super Trouper was also a highlight of Act I.

The three paternity candidates each get their time with both their old flame and potential daughter. All come away thinking they will be walking Sophie down the aisle on her wedding day. Donna and Sam’s duet SOS hit all the right notes and epitomized the caring each once felt for the other.

But the main action circles around the two female leads McLaughlin (Sophie) and McElrone (Donna). Both are outstanding, but the script allows McElrone more range to emote, which she does masterfully. When Donna helps Sophie get dressed in her wedding gown, there is genuine tenderness and disbelief that her daughter is going to be a bride (Slipping Through My Fingers). Donna admits to Sophie that her own mother disowned her when she learned that she was pregnant. After absorbing this heretofore unknown family secret, Sophie asks her mother to walk her down the aisle, bypassing her fantasy of a stranger/father escorting her.

It’s a touching scene for the actresses and the audience. But the script immediately pushes Sam into the room and a bitter confrontation ensues. Donna tells Sam that he broke her heart, presumably when she found out he was engaged (The Winner Takes It All). It emerges that the two still love each other dearly, albeit against Donna's better judgment. McElrone handles the emotional rollercoaster with subtle but strong stage movements and powerful vocals.

The secondary characters have side adventures and a couple of songs, but Williford’s (Rosie) rendition of Take a Chance on Me in her bid to lure Bill into a romantic interlude was another show highlight.

The show finishes at the wedding ceremony officiated by Fr. Alexandrios (Rob Hull). Everybody is there, but many lingering questions remain unanswered. I won’t reveal the ending, but it’s a satisfying conclusion to a well-told story.

As a new Resident Company at The Grand, CTC has a lot more production space than in its old digs. This allows for the Mamma Mia! set to be expansive and lets the players move freely throughout the room. The setting is a Greek hotel and taverna, which was designed by Vicki Neale and Richard A. Kendrick. The sloped stage juts into the audience, which is seated at tables curving around the front and sides of the stage. A prop bar at one side and small tables at the other allow actors to surreptitiously slide into the action to provide backing vocals or movements to augment the main stage activities.

Director Mary Catherine Kelley has instructed her actors to use every inch of the room and play to all corners of the audience. The pacing is tight and the overall theme includes hints of the Disco Era, but has mostly contemporary elements. The dreamy direction during Under Attack was creative and temporarily switched the bride and groom roles. The jaunty choreography by Jackie Kappus and Dominic Santos blends well with Kelley’s vision and Trainor’s dynamic musical arrangements.

Alas, the new space did have its technical issues on the night I saw the show. Wireless mics unfortunately dropped the audio signal for Trevor Fayle (Sky) during his entire vocal performance of Lay All Your Love on Me. Dale Martin (Bill) and Righteous Jolly (Sam) lost their vocal parts in duets Take a Chance on Me and I Do, I Do, I Do, I Do, I Do, respectfully.

But this is not a Greek tragedy. This is a show that celebrates life. As City Theater Company's Board of Directors collectively state in the program: “CTC’s productions are as much party as performance.” I suggest you join the party on Market Street…Opa!

City Theater Company offers a wide selection of soft and alcoholic drinks to enjoy during the show. With the setting of Mamma Mia! being Greece, why not serve some Greek wines and ouzo?

Mamma Mia! will conclude its two-week run on Saturday, although as of this posting, only tickets for Wednesday and Thursday remain. All performances begin at 8 o’clock. The show runs about 2.5 hours, which includes one 15-minute intermission (and one post-curtain disco sing-along).

City Theater Company’s new home is in Studio One at The Grand Opera House located at 818 North Market Street in Wilmington. General admission is $35 and tickets can be purchased at the box office or online.