At the '80s Altar with "The Wedding Singer" 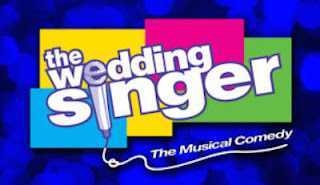 Theater is designed to entertain…And Wilmington Drama League’s production of The Wedding Singer does just that. You’ll definitely leave your seat satisfied and with a smile on your face.

The Wedding Singer is a 2006 musical based on the 1998 Adam Sandler film with book by Tim Herlihy and music by Matthew Sklar. The plot is fairly simple and straightforward, but the actors make this production charming and fun. Tight direction by Lauren Hope Gates keeps the action and humor flowing.

Set in 1985, the story is focused on titular wedding singer Robbie Hart (Anthony Vitalo), who provides the soundtrack to receptions in the small town of Ridgefield, New Jersey.  Robbie and his band open the show with the rollicking It’s Your Wedding Day, where his charisma shines.  Robbie proudly tells the crowd of his upcoming nuptials to Linda (Laura Velarides) the next day.  New waitress Julia Sullivan (Emily Elborn) is charmed by Robbie’s kindness, but is pining for her own eventual wedding to Wall Street banker Glen Guglia (Nick Castillo).

Robbie ends up being left at the altar with only a note from Linda claiming that she wants to be the wife of a rock star and not just a wedding singer.  Meanwhile, an anxious Julia goes out to dinner with Glen, hoping that he will ask for her hand in marriage, which he does (“Pop!”).

Robbie falls into a deep depression, but is emotionally supported by his bandmates Sammy (Joseph Cartagena) and George (Patrick Yarrington).  Even Robbie’s roommate grandmother (Suzette Burgess) steps in to help right the sinking ship.  But it’s not enough, as an angry Robbie takes out his situation on an unsuspecting wedding party (Casualty of Love).

With a new aversion to weddings, the band shifts its focus to bar mitzvahs (Today You Are a Man).  After one bar mitzvah, Julia convinces Robbie to help her plan her wedding because her fiancé Glen is busy with his job.  Robbie is a natural helping Julia customize her wedding day – and a true connection between the two is formed.

Julia’s cousin and best friend Holly (Meg Cranney) convinces Julia that she needs to practice her wedding kiss.  Robbie and Julia awkwardly and lovingly kiss, only to be interrupted by the reality that Julia is marrying Glen.  After seeing the passion in Robbie’s kiss, Holly decides that she should go out with him.  The four of them go on a double date in New York City where Robbie learns that Glen is a serial cheater.  During the date, Robbie also realizes that he is in love with Julia, but can offer her very little in comparison to Glen’s material success.

As expected, we never see much chemistry between the kindhearted Julia and bombastic Glen.  Unfortunately, the script doesn’t allow us to see much attraction development between Julia and Robbie until the aforementioned kiss and in Act 2 when the lovers sing the duet If I Told You. Oddly, the star couple sing most of their traditional duets (physically) apart until the beautiful Grow Old With You late in the show.  But the audience does root for Robbie and Julia to be together in the end.

All the songs when Robbie is “in character” as a wedding singer are top notch.  Vitalo has a powerful voice plus his natural charm makes you understand how his character is so beloved as a small-time entertainer.  Elborn provides girl-next-door sweetness as Julia and adapts her lovely voice to both quiet or dynamic moments.

Cartagena’s Sammy is a funny portrayal of a 1980s wanna-be lothario.  The men’s song Single was a show highlight.  Yarrington is always comedic relief as George.  His Hebrew “prayer” is a riot!  Velarides plays Linda in an over-the-top way which works every time she’s on stage.  Her performance of Let Me Come Home is a rowdy delight.

All these celebrations and outings require guests and the marvelous ensemble cast more than just fill the seats.  Choreographer Dominic Santos saturates the stage with dancers who energize the story and the action.  Kudos to the ensemble performers for their enthusiasm and the times they take on bit roles.

Back to the action… Robbie tries to change himself for Julia by asking Glen for a job at his firm.  Sammy tries to woo Holly (Right in Front of Your Eyes), who is starting to see past his flaws (and mullet).  Linda is starting to have second thoughts about ending her relationship with Robbie.  Most importantly, Julia realizes she’s in love with Robbie.  But she and Glen have hopped a plane to Las Vegas to elope.

Can Robbie get to Sin City and profess his love before Julia gets married?  I think you know the answer, but the conclusion is absolutely worth seeing.  It’s as good as “a Sgt. Slaughter body slam” and includes all sorts of 80’s celebrity cameos.

This production of The Wedding Singer at Wilmington Drama League runs through May 6 at its Lea Boulevard location in Wilmington.  Tickets cost $12-20 for both evening and matinee shows.  Friday and Saturday performances are at 8 p.m. and the Sunday matinee is at 2 p.m.

It’s a show you can “enjoy down to your pancreas.”