Information for this post was provided by a press release from The Delaware Historical Society... 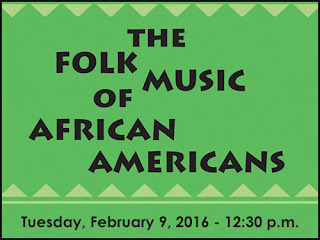 LECTURE: Littleton P. Mitchell Fighting for Equality in the Civil Rights Era
Thursday, February 4, 6:00pm
Delaware History Museum
Dr. Leland Ware, the Louis L. Redding Chair and Professor of Law and Public Policy at the University of Delaware, will highlight Delaware civil rights leader Littleton P. Mitchell’s contributions to advancing the cause of equality. Mitchell, president of the Delaware NAACP for 30 years, is known locally and nationally for his personal courage during the Civil Rights Movement. He was also was a member of the famed Tuskegee Airmen during World War II, for which he was awarded the Congressional Medal.

PERFORMANCE: The Folk Music of Africans Americans with Devonna B. Rowe
Tuesday, February 9, 12:30pm | Delaware History Museum
Award-winning performing artist and educator, Devonna B. Rowe, will take the audience on an interactive musical journey through the history of the African American people, exploring traditional African songs and influences on modern American culture. A Delaware Historical Society program with funding support from The Black Heritage Educational/Theater Group.

FAMILY PROGRAM: The Underground Railroad in Delaware
Sunday, February 28, 1:00pm | Old Town Hall & the Quaker Hill Historic District
Join DHS and Quaker Hill Historic Preservation Foundation for a family event highlighting the Underground Railroad in Delaware. Walk in the footsteps of freedom seekers who passed through Wilmington on their journey to freedom and participate in activities exploring the difficult decisions made by people at that time. The first half of the program takes place in the Quaker Hill Historic District followed by a visit to Old Town Hall at the Delaware Historical Society. There will be family activities at both locations.

EXHIBIT: Dream Quilts The Dream Quilts are on display through the end of February at the Central YMCA in Wilmington, the Walnut Street YMCA in Wilmington and the Dover Public Library. The project was first launched 2012 to inspire a new generation with Dr. Martin Luther King, Jr.’s powerful message from his 'I Have a Dream' speech. After learning about Dr. King’s legacy, school children decorated quilt squares that were later stitched into quilts by A Stitch in Time, an African American quilting group in Dover. In 2014, two of the quilts were exhibited in Vice President Biden’s home at the Naval Observatory during Black History Month.

All programs are free and open to the public, but reservations are requested at deinfo@dehistory.org or 302.655.7161.  The Delaware Historical Society owns and operates the Delaware History Museum; a nationally recognized Research Library; Old Town Hall; Willingtown Square, four 18th Century houses surrounding a picturesque urban courtyard located in Wilmington; as well as the Read House & Gardens located in historic New Castle, recognized as an “American Treasure” by the National Trust for Historic Preservation and the National Park Service; and the Center for African American Heritage, which will be included as part of the expansion of the Delaware History Museum, expected to reopen in spring of 2016.