The Reedy Point Players Stay Gold with "The Outsiders" 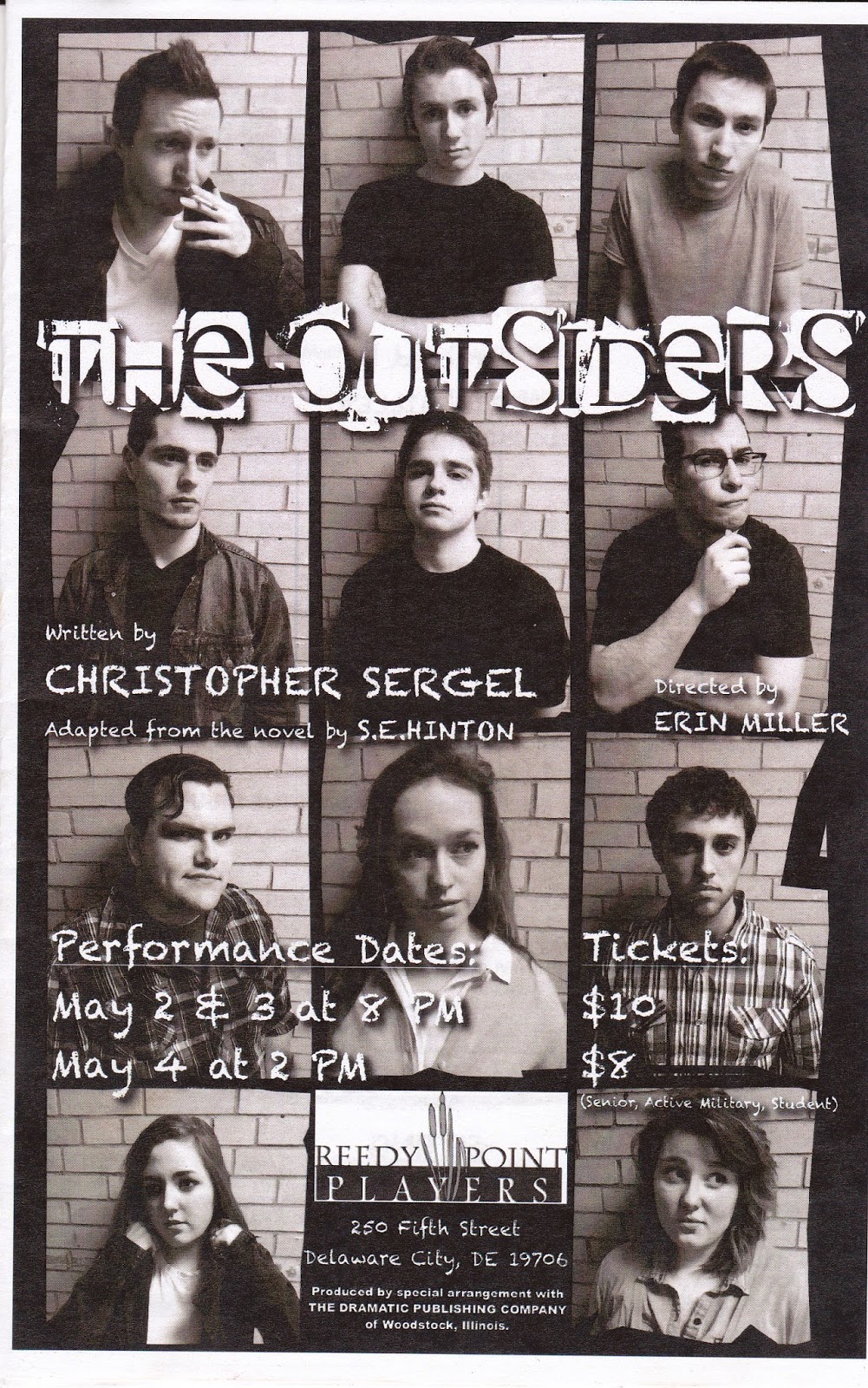 It's not often that I venture south of Wilmington for theater. I go see the Chapel Street Players in Newark on occasion, and I've enjoyed productions at Middletown's Everett Theatre now and then, but one Delaware community theater I had yet to check out was the Reedy Point Players in Delaware City. When I heard they were doing "The Outsiders," based on the book by S.E. Hinton (one of my favorites in any medium), I decided it was time to make the short trip. Just under 30 minutes from Wilmington, RPP is tiny (never a bad thing in my book), utilizing the community center space in the Delaware City Library. "The Outsiders," directed by Erin Miller, centers on Ponyboy Curtis, a bookish 14 year old in 1960s Oklahoma who also happens to run with a gang of greasers -- the poor kids in town who are in a seemingly never-ending battle with a gang of "socs" (rich kids). For Ponyboy, the gang is really just the guys he knows from the neighborhood who look out for each other. He keeps out of trouble, not just because he's a good, honest kid, but also because trouble would mean he'd be removed from the custody of his older brother Darry, who had taken the responsibility of raising him and middle brother Sodapop after their parents' deaths. Unfortunately, trouble finds Ponyboy and his best friend Johnny, a broken boy with a surprisingly old soul. As Ponyboy, Middletown High sophomore Brandon Dawson conveys the character's juxtaposition as the exceptionally intelligent, kind of nerdy kid in the slicked-back hair and blue jeans that defined him as a hoodlum in his time. Any good Ponyboy needs a Johnny who is just as convincing, and Sean Wagner is spot on in what is probably the most challenging role in the play. It's crucial that the audience cares about Johnny, and he, without a doubt, pulled it off. Kevin Austra's Dallas, the bad-boy greaser who would do anything for his friends, hit the right notes, and Dan Davis captured the wisecracking Two-Bit perfectly. Matthew Furman as Darry towers over Dawson, making him an especially imposing figure, especially when he's angry -- but the love he has for his youngest brother came through. Derek Pinchot as Soda and Heather Mickles as Sandy round out the greasers. The socs are a less sympathetic gang, but Cherry Valance (Lauren Bailey), Marcia (Molly Kiefer) and Randy (Max O'Neill) show that they're not monsters, just kids who for the most part are tired of fighting too. They don't really grasp that their upper middle class struggles aren't equivalent to the struggles of the disadvantaged greasers, but Randy points out that the sadistic soc Bob (John Bolduc) was probably the way he was due to being overly spoiled by his parents. It's fair to say there are issues all around. "The Outsiders" combines coming-of-age with tragedy, a story of violence, consequences, heroism and hope that continues to move young readers (and watchers) -- and it translates remarkably well to the stage. RPP's take on it was worth the trip.
Posted by Holly Quinn
Email ThisBlogThis!Share to TwitterShare to FacebookShare to Pinterest
Labels: Reedy Point Players