Revival of the DSO 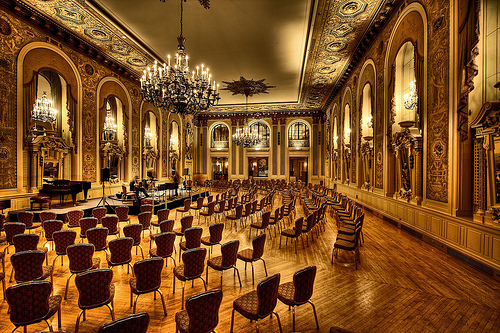 No, it was not the usual Hotel Dupont Gold Ballroom Chamber Series. The champagne was not free, nor were the soft drinks - but the music was first rate.

General Manager Diana Milburn was vigilant – making sure every aspect of the concert went smoothly. She was well-versed about which performers and pieces were in the future chamber concerts. She also made sure there was a beautifully printed program listing the performers and the pieces. On the program was a long list of all of the faithful donors who have been supporting a Delaware Symphony which has not performed since July 4, 2012. If Ms. Milburn has managed to do all of this so quickly, perhaps there will be a chance for the symphony to survive.

And survive it should. The Mozart Divertimento for Strings No. 3, K138 in F Major was as smooth as silk. Violinists Luigi Mazzocchi and Lisa Vaupel, violist Elizabeth Jaffe and cellist Naomi Grey played together as if they had been working together for years. Every phrase and nuance of the Mozart was magically melded with dynamics and articulation falling into place enabling the subtle musical colors to fill the room.

The Beethoven String quartet No. 9, Opus 59, No. 3 is a very complex piece which became a showcase for each of the four players. The rich support of Lisa Vaupel’s violin was so together with Luigi Mazzocchi’s that it was difficult to tell who was playing which line at times. Elizabeth Jaffe’s rich, dark, melodic lines on the viola created an inner voice that made the music rounded and full of harmony. I had heard the former players in chamber concerts, but this was the first time I had an opportunity to hear the amazing virtuosity of cellist Naomi Grey. She had some very difficult passages in the Beethoven which she played as if they were easy. Her tone, intonation, pizzicato and her ability to project were remarkable. This made me realize that there is so much talent in the Delaware Symphony that we just don’t hear individually. What a perfect occasion to do so.

The second half of the concert was much lighter fare for the listener, but certainly not light for the players. The Giacomo Puccini Three Minuets for Strings are really vocal writing and the quartet took this challenge quite lyrically. The Lullaby for string quartet by George Gershwin is a lush arrangement by the composer of a long piano solo piece which had extensive exposed parts for each instrument.

The concert ended with some fun Latin tangos and dances. Luigi Mazzocchi introduced them as dear to his heart and proved it by his energetic playing. The concert was a great taste of what we could have if we continue to support our endangered symphony. Bravi to all the players and to Diana Milburn who has boldly taken on the challenge of righting the ship.