When Thomas Blanchard’s crisp xylophone rhythms make you sit up straight and then groove, you know you are in for a strict but jazzy rendition of the original Porgy and Bess at OperaDelaware. Stuart Malina has made sure that the very talented orchestra has clear signals and he also gives them rein to do what they do best. 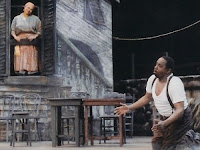 The opera, written by a white Jew from Brooklyn in the 1930s, has sometimes been labelled too pop and too white, but it is definitely a work written in formal and classical language to evoke, not imitate, the jazzy sound of Harlem and the black spirituals George Gershwin heard in his sojourn to the south as well as telling a story emphasizing the desperation of racism, poverty, discrimination and disability.

The duet between Richard Hobson (Porgy) and Janinah Burnett (Bess) is perhaps the best illustration of the classical structure of the opera. The soprano and baritone have the highest skills and training in vocal control and their voices are matched in strength and quality as they sing together in Bess, Yo’ is my woman now and they also have the stage presence and acting skills to sweep the audience into the romantic haven their relationship represents.

The evil character, Crown, (Martin Fisher) has a strong voice and oozes egoism, physical force and venom as he uses liquor, drugs, sex and murder against anyone who gets in his way. Bess tries in vain to resist his powerful sexuality and is doomed by her own desires and weakness.

Larry D. Hylton as Sportin’ Life has the long, lanky triple-jointed dancing legs of Fred Astaire and a voice made for his role. His string-bean thinness adds to the snaky image he manages to portray in the almost loveable gadfly of temptation. Hinton’s Ain’t necessarily so is a show in itself!

Stuart Malina’s conducting is energetic and lets the music flow – from the delightful English horn harmonies in Summertime played beautifully by Lloyd Shorter to Lynn Cooksey’s rhythmic piccolo, to Karen Schubert’s smooth horn to the mellow bass notes of Rose Vrbsky’s bassoon and Douglas Mapp’s double bass. The general orchestra volume can tend to overwhelm some of the singing, but nothing is lost in this production.

The set is also brilliantly designed and constructed for a quick scene change, transforming the Charleston street to indoors in a jiffy – brilliant coordination between designer Cindy DuPont Tobias and builder Robert Parker.

In short, this is a wonderful production and a great sendoff for the tireless Executive Director Leland Kimball. See it now – you won’t regret it. Sunday, May 6, Friday May 11 and Saturday May 12. Note: Friday’s performance has family ticket prices. 1-800-37-GRAND or 302-652-5577.