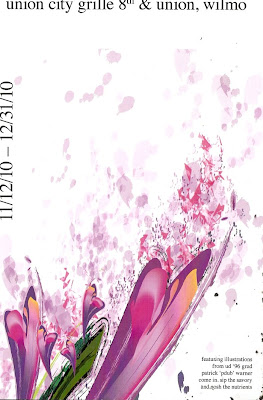 Back when (or, possibly, where) I studied art in the early '90s, there was a clear division between the technical and what is considered "fine art." Fine art students like myself didn't take computer classes. Not even Photography students -- and this was at one of the top art schools in the country. I thought it was pretty silly, even then. I didn't have my own computer, but, it seemed to me, what could be more "modern" than using computers in modern art? I took a computer class and was one of only two students who were not graphic design majors in the room. I felt over my head -- programs were more complicated 1992, and I didn't even know how to use a mouse -- and I never created anything memorable in that class. Still, I believed that computers and art were meant to be together.

Today, of course, computer technology is more accepted in the arts than it was 20 years ago, but I still get excited when I see an art show with work created with the computer as a medium.

"Allergen," an exhibition of illustrations by Patrick "PDub" Warner now on display at Union City Grille, is one of those shows. You wouldn't necessarily know it when you first walk into the gallery -- some of the pieces are huge, much larger than a typical physical digital piece. Warner explained that, to create pieces that large, they had to be printed by a sign company, who essentially made giant color copies on a special poly canvas. The result is striking, with bright, bold colors and a glossy finish. Warner is a commercial artist, and some of the pieces were converted from his own commercial work, giving it a genuine "pop" feel.

Several pieces represent flowers (a lily, a rose and an orchid) floating over a background of vintage war imagery. Other pieces feature a zip-gun, a frog, a rattlesnake and a spectacular larger-than-life parrot. My favorite pieces are one appropriately titled "Sunflower Galaxy" and the show's title piece, "Allergen," a violet explosion of flora and splashes of "ink" and "paint." The image on the opening postcard doesn't do it justice -- this is one worth stopping in to see in person.

"Allergen" runs through December 31.
Posted by Holly Quinn
Email ThisBlogThis!Share to TwitterShare to FacebookShare to Pinterest