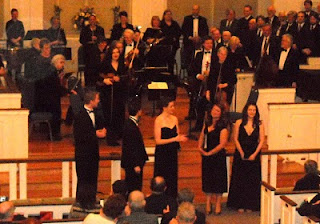 Mounds of snow did not keep more than 150 people from bundling into the United Methodist Church of Newark on Saturday, February 13 to hear the chamber ensemble of the Newark Symphony Orchestra play Baroque masterpieces, but the snow did rob them of some players who were also in Wilmington Community Orchestra’s concert rescheduled for the same evening. Oh, winter weather woes!


The ensemble found their verve on the Marc-Antoine Charpentier Noëls sur les instruments, adopting the dancing lilt of the notes inégales, which music director Nicole Aldrich explained were part of Charpentier’s instructions – to vary the rhythm according to good taste.


Aldrich also noted that the word Baroque was more of an insult than a compliment, coming from the Portuguese word barocco, which meant a bulbous pearl. In their day, people spoke of songful music and the new Baroque. So, Aldrich quipped, calling something Baroque was like saying ‘What’s with young people’s music these days?’


Hard to imagine that Bach’s audience could have felt that way when you hear the Magnificat, with the fine Newark Symphony Chorus’ on-cue attacks and enunciation. And the five young soloists from the University of Maryland were lively and strong singers as well.


The chamber ensemble also shone in the Bach – from Sue Ritter’s oboe duo with second soprano Katherine Sanford to the excellent bass lines played by Jennifer Hugh on bassoon, Leon Daniels on cello and Felix Cohen on double bass.


The next performance of the Newark Symphony Orchestra will be Sunday, March 7, at 3 p.m. at the Independence School.