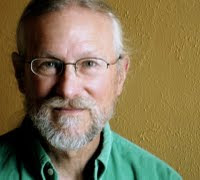 By Guest Blogger, Chuck Holdeman, composer of “Sonate en Trio”, which will appear on the new Mélomanie CD
Chuck is a regional composer of lyrical, contemporary classical music, including opera, orchestral music, songs, chamber music, music for film, and music for educational purposes.

What an outstanding pleasure it is for a composer to hear his work played by the terrific players of Mélomanie! The group is recording the work and I’m delighted that they will also feature a portion of the music at their October 2 soiree and fundraiser.

My approach to writing for the flute, ‘cello, and harpsichord includes taking advantage of the resonance and color of the harpsichord to create a rhythmic and harmonic canvas on which to paint lyrical and intertwining lines for the flute and ‘cello. At other times, the harpsichord has a solo or interacts as an equal in fugato passages.

Sonate en Trio is one of several of my works which pay tribute to Ravel and Debussy, whose seductive and colorful harmonic sense is often related to the impressionist painters who were their contemporaries.