Maestro Amado Unites a City Under the Stars 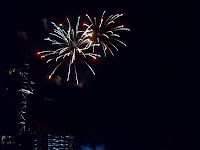 By Guest Blogger, Jessica Graae
On a most perfect night at Tubman-Garrett Park on Wilmington’s Riverfront, people came together to celebrate the Fourth of July. It was a momentous occasion for the city, observed in a location that commemorates heroes of the Underground Railroad and the anti-slavery movement, at a moment when our country is regaining its collective pride being while being led by our first African-American president.

Maestro Amado’s energetic, yet sensitive and expressive conducting painted a swath of bright colors with the Delaware Symphony Orchestra. Amado took the orchestra and the audience on a historic and emotional journey. Ever the educator, Amado gave the audience a taste of the work of two great American composers, Aaron Copland and Charles Ives. Copland’s Fanfare for the Common Man--with its pure open fifths and simple melodies--is an accessible, warm piece. Ives’ Variations on American the Beautiful orchestrated by another American composer, William Schuman, is a tapestry of musical styles, from Classical to Victorian. At one point, the orchestra played a quirky variation that could have served as an overture to a Gilbert and Sullivan Operetta.

The Delaware Valley Chorale, under the direction of David Christopher, sang beautifully. Despite being amplified over a large space, each word and voice part rang out clearly. Their rousing rendition of The Battle Hymn of the Republic energized the audience. Moving was their wordless Hymn to the Fallen, from John Williams’ "Saving Private Ryan" film score, accompanied by the DSO.
Before closing the program with marches by John Philip Sousa, the orchestra played a medley of tunes from armed forces. As veterans, enlisted and reservists stood when they recognized the theme music of their division, the audience cheered. The colorful firework display brought the evening to a joyous finish.
Posted by Arts in Media
Email ThisBlogThis!Share to TwitterShare to FacebookShare to Pinterest