Here She is Delaware, and You Don't Want to Miss Her!

The Wilmington Drama League (WDL) opens its 79th season with the quintessential Broadway musical, Gypsy. Tommy Fisher-Klein does a capital job directing this classic show with a book by Arthur Lurents, music by Jule Styne, and lyrics by Stephen Sondheim. Mr. Fisher-Klein’s production uses a minimalist set by John Fisher-Klein, so the audience focuses on the characters and the true story of a stage mother in the early 1900’s who’s determined to make her two daughters into stars.

Tina Sheing plays the obsessive stage mother, Rose, who will stop at nothing to make her daughters’ dreams come true, or really Rose’s dream of startdom. Ms. Sheing captures the many facets of the character – loving, overbearing, selfish, ruthless, controlling, resourceful, determined and loud!  She is a woman who won’t take no for an answer. Ms. Sheing’s intensity is like walking over a partially frozen pond, you know when she will crack and explode into a tirade when another character attempts to stop her mission. Sheing’s superb voice handles the show’s iconic songs, such as Some People and Rose’s Turn, with great verve.

Among the many standout performances, Ms. Sheing shares the stage with Pat Sutton as Rose’s “spineless” beau and her daughters’ manager, Herbie, and Ashley Wright as Rose’s shy daughter, Louise, who plays second to her star stealing sister, but later becomes the world’s most famous burlesque performer, Gypsy Rose Lee. Both Mr. Sutton and Ms. Wright give transformational performances. Initially both characters are stunted by Rose’s domineering personality, but by the end, both find their own voices and gain control of their own lives. In addition to Mr. Sutton and Ms. Wright’s excellent performances, Lizzy Sprague as the charismatic June, Rose’s beautiful and talented daughter; Dan Sanchez as one of June’s backup dancers, Tulsa, Nicole Hemphill as the younger version of June (Baby June); and Talia Speak as the younger version of Louise (Baby Louise) give fine performances.

However, the audience has to wait until the second act before three of the shows most comical characters are introduced, Tessie Tura (played by Jodi Persing), Mazeppa (played by Meaghan Gonzalez), and Electra (played by Maureen Cotellese). The three professional burlesque performers introduce Louise to the art of stripping with the humorous musical number You Gotta Get a Gimmick. Sure anyone can be a stripper, but to be a star you have to set yourself apart from the other burlesque performers. All three women give stellar performances and they know exactly how to bump and grind it!

After listening to so many beloved show tunes, I walked out of the theater joyfully humming some of my favorite songs from the show, Everything’s Coming up Roses and Together, Wherever We Go. I’m hoping to make it back to WDL to see it one more time! 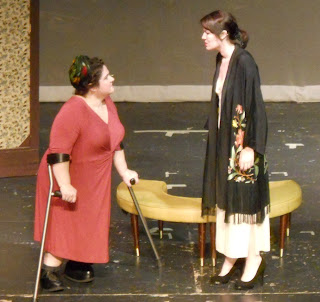 The films are spectacular and sometimes even daunting. This Sunday I arrived at the Art Museum a bit early and had a fun time speaking to members of the predominantly Chinese crowd of spectators. The film being presented was a documentary by Director Chaoti Ho called My fancy high heels. It starts in New York City following a Korean-American fashion designer who is a beautiful, soft-spoken and determined woman who has made a start in the maze of the fashion world. She speaks of her hard work, long hours and her passion for shoes which she regards as pieces of art. The director then shows us the two levels of Chinese production behind her shoes: a harsh end-production factory with a strict manager who speaks English as he sells to Western buyers and then the stage before that – an almost militaristic farm/factory where young people tend and process cattle raised exclusively to produce leather for the highest end of shoes on the market.

This movie forces the viewer to reconsider the entire shoe industry. The music and cinematography are graphic and the story is an extremely moving picture of a China which Americans may not know but in which their purchases and tastes are driving forces. The next film is to be a much more uplifting work about cinematography by Hsiu-Chiung Chiang and Pun-Leung Kwan. Let the wind carry me will be shown at the Delaware Art Museum at 1 p.m. on September 16. Free admission to museum and to film on Sundays.

Art IS everywhere in Sussex and Kent County

Last weekend we decided to go to a restaurant on the C& D Canal and enjoy dining while the sun set on a fantastic view of the railroad bridge and a beautifully maintained marina. When we arrived at Aqua Sol, we saw an full-size reproduction of Howard Pyle’s Flying Dutchman which he had created for Collier’s Weekly in 1900. What fun to find one of the centennial works reproduced out in the woods near Lums Pond!!! We asked our waitress about the painting and she brought us a brochure from the Delaware Art Museum with a map and addresses of all fifteen works placed in various outdoor locations throughout the state. We vowed to see them all.

This past Saturday we headed for the beach to catch Edward Hopper’s Summertime which the Lewes Historical Society had placed at the entrance to the charming Lewes Farmers’ Market which is on Shipcarpenter Square – surrounded by some very old historic buildings. Then we headed to see friends near Angola and took off in the late afternoon for Rehoboth to see Howard Pyle’s Buccaneer in front of the Rehoboth Library. A quick coffee and we headed for the opulent Georgetown Public Library (built by the millionaire who owns the development we had just visited in Long Neck) where we saw Abbott Handerson Thayer’s The old lion. Thayer was a naturalist who wrote about the protective coloration of animals. His conclusions are now referred to as Thayer’s law and he is considered one of the theorists behind camouflage dress.
﻿﻿
Rain began to fall copiously as we made our way to Milford’s Mispillion Art League to see our third Howard Pyle, The Mermaid, which was posted on the white wall of the Art League, with the darkening sky and stormy raindrops falling on it as we stopped to mug in front of it for a cell phone group picture.

After a snack in Milford – we hit the road again to start the Kent County tour. Absalom Jones by Raphaelle Peale, was standing alone behind a few orange construction barrels in the dark and rain. My friend positioned her car so that we could have light on the painting and we celebrated our fifth pop-up of the day before moving on to Smyrna. By the time we reached the parking lot of the Smyrna Opera House, the rain was pouring down and we drove as close as we could to Dante Gabriel Rossetti’s Veronica Veronese, snapping shots on the cell phone.

The chase of art was a delightful way of touring and appreciating our neatly compact state and we spent a long time wondering how the Delaware Art Museum planned this fantastic campaign – how they chose the works and the placements. I shall report again as we finish our pop-up tour of New Castle County.