The Delaware Shakespeare Festival Celebrates its 10th Anniversary with a Splendid Production of A Midsummer Night's Dream!

Now in its 10th year, the Delaware Shakespeare Festival has brought some of William Shakespeare's most beloved plays to hundreds of picnicking audience members. Yes, the play is performed outside and audience members are encouraged to bring blankets and chairs, as well as food and drinks (including wine). The festival premiered in 2003 at Archmere Academy. In 2006, the group moved to the majestic grounds of the Rockwood Mansion, a perfect setting for this year's production of A Midsummer Night's Dream.

Director David Stradley masterfully emphasizes the plays major theme - love and the many aspects of the mysterious feeling/emotion - especially with the brilliant sliver set featuring large X's and O's sculptures by Scenic Designer Christopher Haig. The performers cascade on and off the stage and at times disappear into the wooded area behind it or leap into the audience to make an exit.

The whimsical play is about two young human couples (Jamal Douglas & Sarah Van Auken and Sean Bradley & Jennifer Starr Foley) falling in and out of love, with a little help from the magic of a few fairies, including the fairy king Oberon (Matt Tallman) who is dueling with the fairy queen Titania (Caroline Crocker) for supremacy. 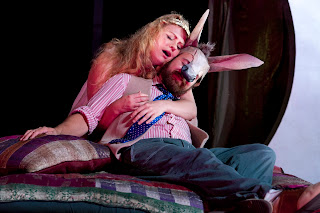 Shakespeare explores how love makes a fool out of everyone. We watch the two couples perform foolish acts of love and disdain toward their betrothed. In addition, the king's assistant Puck (Griffin Stanton-Almeisen) transforms an actor Bottom (Adam Altman) from a bumbling touring troupe into a donkey and casts a spell over the queen, causing her to fall madly in love with him. Proving that sometimes we go from acting like a fool to becoming an ass when we fall in love.
The skillful performers, the beautiful setting, the eloquent text, the flowing choreography by the First State Ballet Theatre’s Alex Bucker, and the romantic score written by David Amado (Music Director of the Delaware Symphony Orchestra) make A Midsummer Night's Dream a splendid production for all to experience. It was wonderful to see parents introducing their young children to the bard's work, as well as older couples who were more familiar with the play sharing a bottle of wine and enjoying a most gorgeous evening.

A Midsummer Night’s Dream runs through July 28. For information and tickets, visit www.delshakes.org or email info@delshakes.org.
Posted by Charles "Ebbie" Alfree III No comments:
Email ThisBlogThis!Share to TwitterShare to FacebookShare to Pinterest

Celtic Harvest, one of the appearances at the Rockford Tower Summer Concert Series, describe themselves this way: “Most of the songs we play you’d hear if you darkened the door of an Irish pub or two.” And it’s true…I think. The band consists of Kelly Crumpley, fiddle and whistle; Jan Crumpley, flute(s) and whistle(s); Kathy Doyle, vocals and piano; Jim McGriffin, guitar and banjo; and Mike Nielsen, bass, second guitar and occasional accordion.

The third song of their set was the first one to catch my ear; it was a lament for a lover, filled with fantastic harmonies and a flute/fiddle point-counterpoint melody line that was resounding. They followed this up with a few Irish reels, which were fun, little skip-y songs filled with pep and feeling. For these, I give props to the flutist and whistler, who flawlessly executed the runs and scale increments. They did a few “songs about redemption” which were a bit more mellow (though not as slow as a lament), through which they tried to engage the audience with prompts to clap and sing along.

For a moment of technical difficulty, they filled in what would have been silence with a traditional Irish Lament played on the whistle. This was absolutely my favorite moment of the performance, only topping the reels by a little bit. The song was poignant and beautiful; deep-reaching and just barely outside the realm of what I would term ‘haunting.’ One drawback of the family-friendly outdoor venue presented itself in this moment: It’s tough to enjoy a concert when half of the audience is not there for the music, but to chit-chat, play with their dogs and run with their children. But, that’s the nature of a concert such as this.

The next song — one “about the transition of shoes from hand-made to machine-made” — was saucy and proved that the Irish really will make anything into a song as long as they can dance to it, or perhaps sing along! The final tune was one that almost everyone should recognize — Danny Boy, Oh Danny Boy. A fine way to end, not only because it captured the audience’s attention with the familiar, but also because Ms. Doyle did a fantastic job on the vocals.
Posted by Arts in Media No comments:
Email ThisBlogThis!Share to TwitterShare to FacebookShare to Pinterest

The DuPont Clifford Brown Jazz Festival, held in Wilmington’s Rodney Square, is clearly a crowd favorite. When I arrived Saturday evening (the last night of the festival which ran June 18-23), the square was absolutely packed. The group on stage is Hiromi: The Trio Project with Anthony Jackson and Simon Phillips, and they have all eyes on them.  Hiromi is a jazz pianist from Japan who fell in love with the genre after years of classical music training. Her fellow bandmates, Anthony Jackson and Simon Phillips, show off their talents on supporting instruments. Their music is sans vocals, but the energy and enthusiasm of Hiromi is completely infectious, and listening to her play ’70s style jazz is fun and engaging. Overhearing people around me, I found two consistent comments: “She is the cutest person!” and “Look how much fun she’s having!” Unfortunately (for me), I was late arriving and only got to enjoy a song and a half, but that was enough for me to prove their musical prowess!

Next up, and the closing act for the festival, was a group who travelled all the way from the Virgin Islands—Dee Dee Bridgewater and her band. Ms Bridgewater, the lead singer, has a fantastic, old-school, smoky jazz voice and a talent for scat, which is harder and harder to find in jazz artists. Backing her up was a pianist, an upright bass player, a drummer, and a reeds/flute player. Aside from Ms. Bridgewater, the latter was my favorite.  He had sharp, fast fingers and a wonderful, soulful sound. In my opinion, it’s hard to be a saxophone player. The sound of that instrument isn’t always pleasing, and can make or break a song. However, the player in Ms. Bridgewater’s band (whose name I didn’t catch) did a magnificent job, and I could’ve listened to a performance of him alone. They did a few Billie Holiday songs, an Ella Fitzgerald or two, and what sounded like a few originals scattered in. My favorite was when Ms. Bridgewater announced they were going “off-the-cuff, unrehearsed” with a version of Joy Song, to honor Clifford Brown, the namesake of the festival. This song is fast-paced and packed with words, and she warned the crowd, “I’m gonna try to get these lyrics…but if I can’t get ’em, I’m just gonna scat!” Her effort was impressive; she made it through the first bit splendidly but then got a bit tongue-tied, playfully exclaiming “Oh shoot!” and scatting the rest of the song—which was just as enjoyable, because she does it so well! Hopefully, Dee Dee Bridgewater and her band will be traveling back to Wilmington more often.
Posted by Arts in Media No comments:
Email ThisBlogThis!Share to TwitterShare to FacebookShare to Pinterest
Newer Posts Older Posts Home
Subscribe to: Posts (Atom)