This post comes courtesy of a CityFest press release. 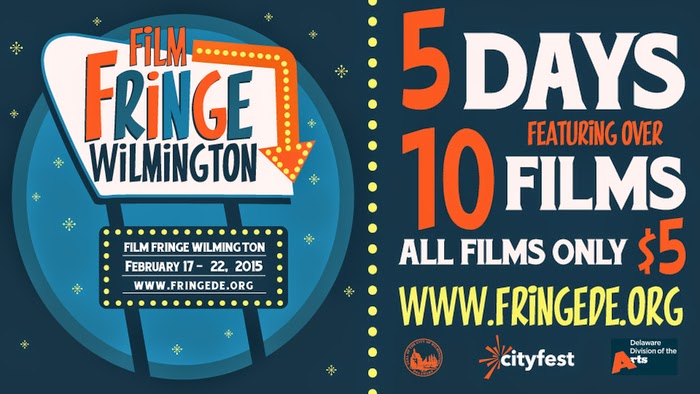 The City of Wilmington and Cityfest, Inc., the City’s nonprofit cultural programming organization, are excited to announce the FilmFringe Wilmington Festival that will take place from Tuesday, February 17 to Sunday, February 22, 2015 at Theatre N at Nemours, 1007 North Orange Street, in downtown Wilmington.

The 2015 Film Fringe Wilmington Festival will include the popular annual Extreme Filmmaking competition and screenings of independent films by local, regional, and national filmmakers.  Fringe Wilmington is Delaware’s only multi-day celebration of unconventional art.  In previous years, Fringe has been a single festival in the fall, which included live performances, film and visual offerings.  This year, the Fringe Committee has separated each of the disciplines into their own five day festival, starting with performing arts last November in Live Fringe, followed by Film Fringe in February 2015, and Visual Fringe in May 2015.

Film Fringe kicks off with a free Preview Party, where trailers will be featured for each film of the festival.  The Preview Party will also include a screening of the Extreme 5-minute Filmmaking entries, including an awards ceremony to announce cash prize winners of the contest, as well as Fringe-inspired cocktails by The Painted Stave Distillery of Smyrna, Delaware.

In Film Fringe Wilmington’s inaugural year the committee was excited to receive more quality entries than could be screened in the initial four days of programming allotted.  As a result, the Preview Party has been scheduled for Tuesday, February 17 to allow for a full five days of films. In the day’s following the Preview Party, film novices and enthusiasts may sample a wide variety of film genres, ranging from dramas to documentaries, comedies to action.  A few highlights include an entire evening dedicated to music documentaries on Friday, February 20 and ‘An Afternoon With John Evans’, the world-renowned filmmaker on Sunday February 22.

Tickets are available on the Fringe Wilmington website at www.fringede.org and will be available at the Preview Party, as well as at the Theatre N box office immediately prior to each showing.  Individual ticket prices are $5.  Audience members can also purchase a 5-film pass for $15 or a 10-film pass for $25.  Fringe Wilmington continues its model of providing 100% of ticket sales to participating filmmakers.