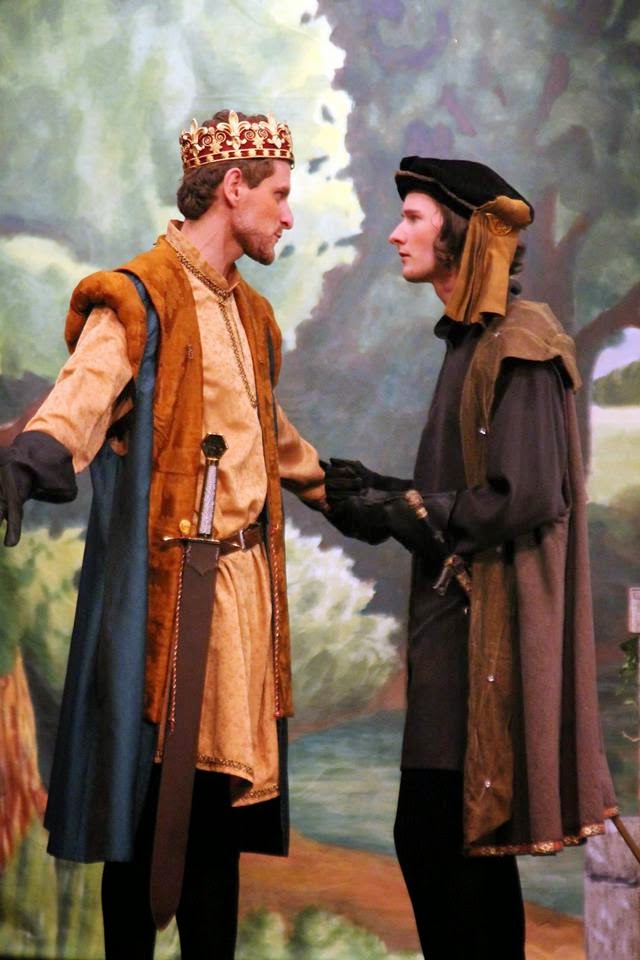 I have to admit: Richard II has never been one of my favorite Shakespearean plays.  Sure, it’s got all the elements: psychological interest, pageantry and beautiful verse.  But this is also a play where even a gardener talks in rhymed couplets and uses his trade as a moral allegory for good government.  And its principal theme — the divine right of kings —is a concept few, if any, Americans can grasp.  And since we almost never get to see Richard do the deeds that so many unite to oppose, the aristocrats’ complaints appear petty and trivial—much ado about nothing, except maybe greed.

Luckily, this production by the Arden Shakespeare Gild dispels all doubts with this compelling and cogent production.

Greg Faber is simply splendid as Richard.  Physically slight and soft-spoken, Faber portrays a king so convinced of his own regalness that he has become completely devoid of compassion and removed from the needs and desires of his subjects.  He dismisses Gaunt’s death with a pert “So much for that” then seizes his lands.  He exhibits a callousness borne not of intended malice but of breeding, which makes his deposition all the more engaging.  We see him gamely trying to bear the crown’s responsibilities in the first half, but find him having much more fun when forced to relinquish it. Throughout the entire performance, Faber never loses a center — every utterance and gesture is well-conceived.

The production features many noteworthy performances.  Henry Moncure III is convincing as the tormented Duke of York, a traditionalist who is loyal to the crown and deeply upset by any treason against it.  Dan Tucker is a standout condemning Richard as the dying John of Gaunt then doubling as the Richard loyalist Bishop of Carlisle.  The dispute between Bolingbroke (David Hastings) and Mowbray (Lee Jordan) is sharp and fiery, giving us insight into Bolingbroke’s political machinations. The juxtaposition of his character with Richard’s striking.

The costuming is traditional and the accompaniment by the Shepherd’s Pipes reinforces the medieval atmosphere.  This is a powerful production reveling in some of Shakespeare’s most vibrant and intellectually stimulating verse.  The strong, capable cast under the direction of Tanya Lazar engages the audience from the play’s uneasy opening to its sudden and bloody end.