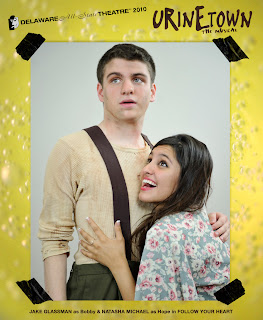 At times, it was easy to forget Urinetown was cast only with student actors. The singing, acting and dancing was so spot-on, and so professional in most cases. The only indication of the cast’s youth was the occasional actor looking startling with white hair, or those who hadn’t quite grown into their adult voices and bodies. The audience and the actors seemed to love this production by the Delaware All-State Theatre at the DuPont Theatre.

Producer/Director Jeffrey Santoro choreographed many snappy numbers, making excellent use of the space on the simple set. “Mr. Cladwell” is a song reminiscent of “I think I’m gonna like it here” from Annie. Hope Cladwell (sung beautifully by Natasha Michael), Cladwell B. Cladwell’s daughter, meets her new co-workers-her father’s lackeys-and they give her the seal of approval in a rousing, fun chorus. Later in the musical, Annie is fair game again, when several characters remind us “The sun will come out tomorrow”. The musical’s creators, Mark Hollmann and Greg Kotis, are shameless musical quote from Andrew Lloyd Webber’s Evita.

Not only do we get an “in-your-face” sometimes groan-worthy mocking and quoting of Broadway musicals, we get a constant breakdown of the fourth wall. Lockstock, who was expertly played by Jordan Weagraff, is the most successful at handling these sarcastic, knowing quips about the show and its merits that he tosses out to the audience. After a while, the show’s self-commentary becomes tiresome and glib.

Jake Glassman was charming and sincere as Bobby Strong. He manages to step out of the stock character cartoony role, and make the flash back scene, “Tell Her I Love Her” extremely funny as he appears a ghost in the mist. Another stand out was the pregnant Little Becky Two-Shoes, played by Lydia Stinson. One of the strongest actors in the show, she was lively, animated and always involved in the action on stage. Mike Hinkle was energetic and convincing as the slimy Cladwell. As Penelope Pennywise, Maren Lavelle had good command of the stage and a natural sense of comic timing.


Though Urinetown was intended to be an edgy, political satire, I found myself wondering exactly what the commentary was. I understood that big business and corruption are bad, and make people do bad things. The show’s theme simplified: everyone should have access to a toilet when nature calls. Maybe I am old-fashioned, but I also found myself thinking there are other musicals that carry a stronger message and are more deserving of the spotlight.
Posted by Jessica Graae
Email ThisBlogThis!Share to TwitterShare to FacebookShare to Pinterest
Labels: Delaware All-State Theatre, DuPont Theatre